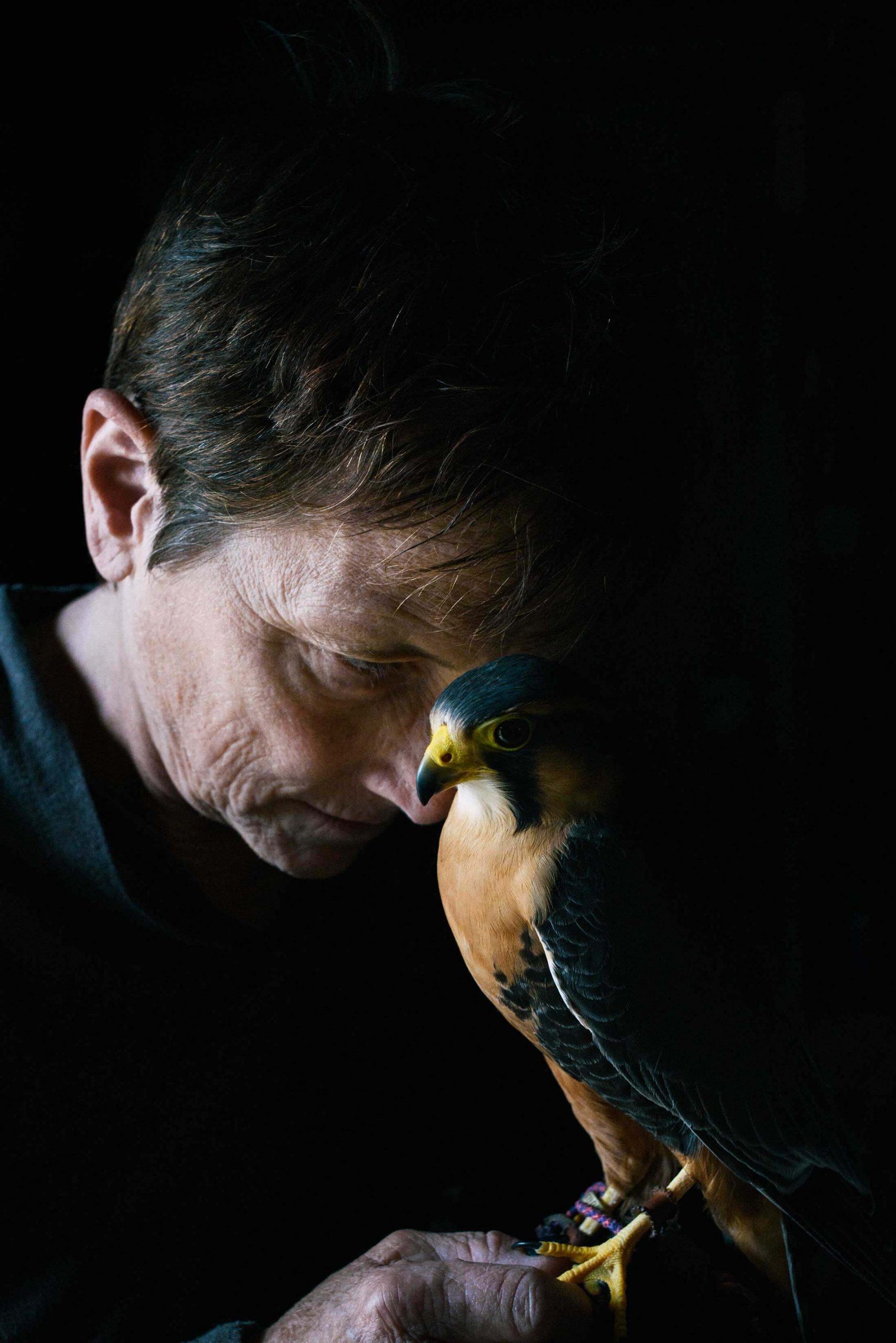 A 7,000-year-old tradition persists in the california skies. 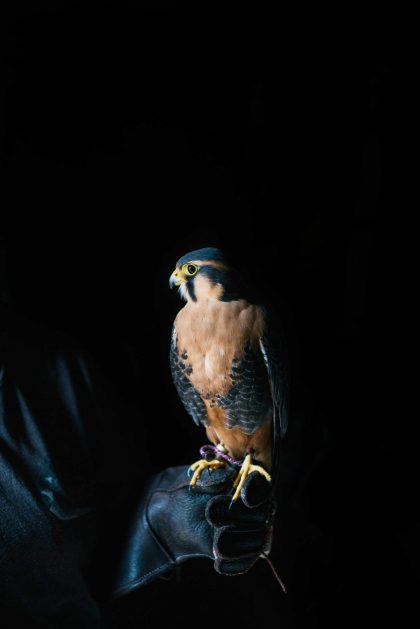 Wings the color of bittersweet chocolate and rust beat the cold air of morning against Kate Marden’s face. This Harris’s hawk wants to fly, and his mistress knows it. He shrieks, straining against the leather straps securing his legs. 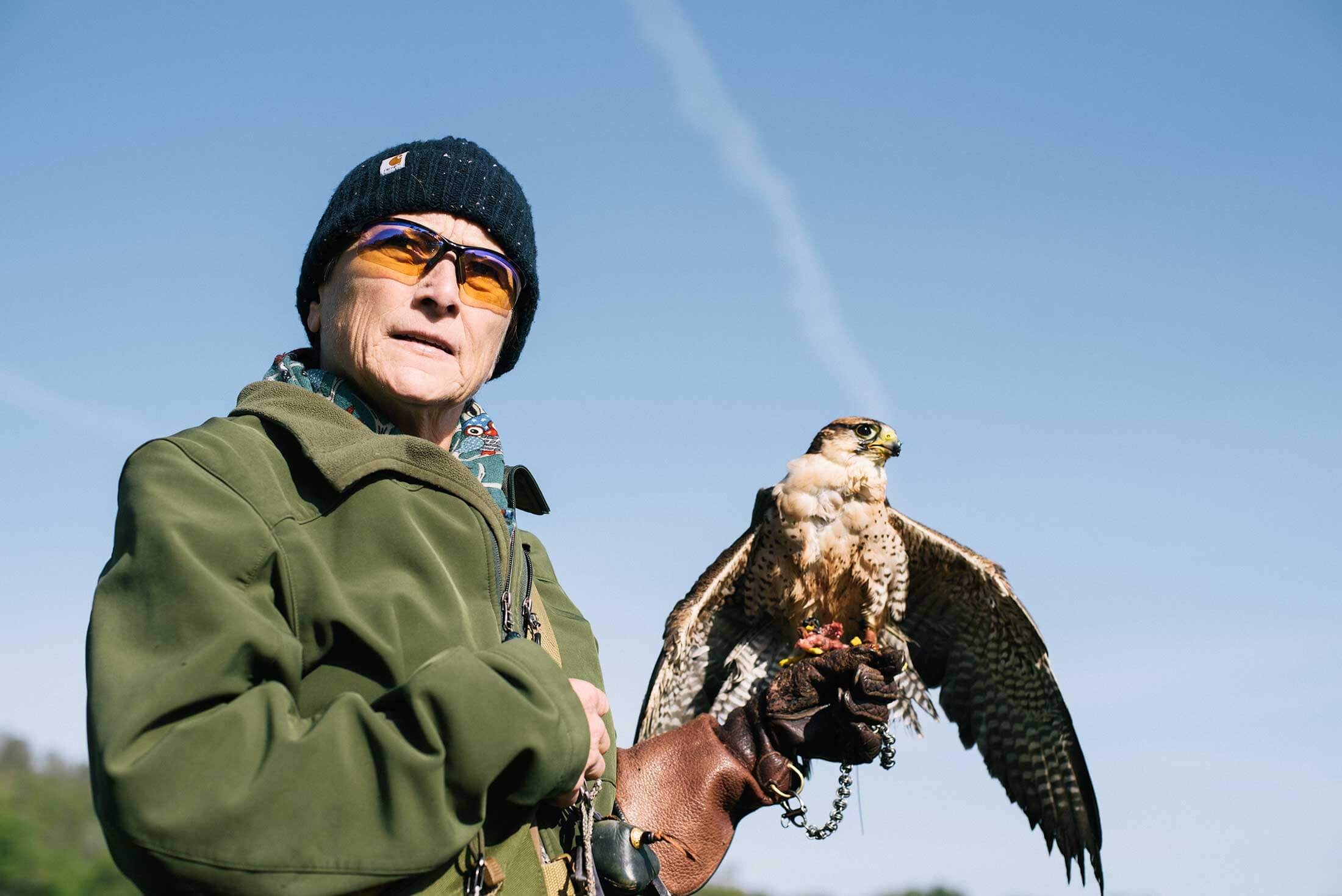 lanner falcon Archy has had his hood removed in preparation for flight during the Triple Raptor Experience class at West Coast Falconry.

A choke of city slickers stands behind Marden under gnarled live oaks, bundled against the chill of January in Northern California. Her assistants fit each of these fledgling falconers with a single leather glove, garnished at the web of the thumb and index finger with a smear of raw quail meat. This is all the hawk needs to alight on a stranger’s forearm when called. In turn, each student’s eyes ignite with marvel. It’s their first falconry class, but already they seem spellbound.

“Too see that look of wonder helps me to remember what it was like for me the first time I had my bird fly to my glove,” Marden says. “It’s an amazing feeling.”

Falconry is classically defined as “taking wild quarry in its natural state with a trained raptor,” which in everyday parlance means training birds of prey to hunt small game like rabbit, squirrel, and quail in the wild. But to modern practitioners, it defies such simple descriptions. T.H. White, a besotted falconer best known for his series of Arthurian novels The Once and Future King, wrote that the sport “is not a hobby or an amusement, it is a rage. You eat it, drink it, sleep it, and think it, even in recollection.” For her part, Marden calls falconry “the virus that never goes away.”

A master falconer of 14 years and a practitioner of 20, 60-year-old Marden is the founder of West Coast Falconry, a woman-run school in the foothills of Marysville, California. Hers is the only facility on the West Coast, and one of just 20 nationwide, where the unlicensed masses can carry a bird on the glove. To her students, the school is a chance to connect with fiercely wild raptors. To Marden, it’s an urgent mission of preservation.

Once a means of survival for early civilizations, falconry has become a rarefied endeavor, the so-called “sport of kings.” It is woven into proud national histories across the UK and much of the Middle East. But in the U.S., it’s hidden and niche, a recent addition by American soldiers returning from tours in Northern Africa and Great Britain during the two World Wars.

In addition to a great deal of expertise, falconry requires access to wide open spaces where birds can hunt. As development gobbles up open land throughout the world, the sport has begun to shrink even further. If she can help it—and she is, aggressively—Marden won’t abide the disappearance. “These birds,” she says, “are my lifetime endeavor.” 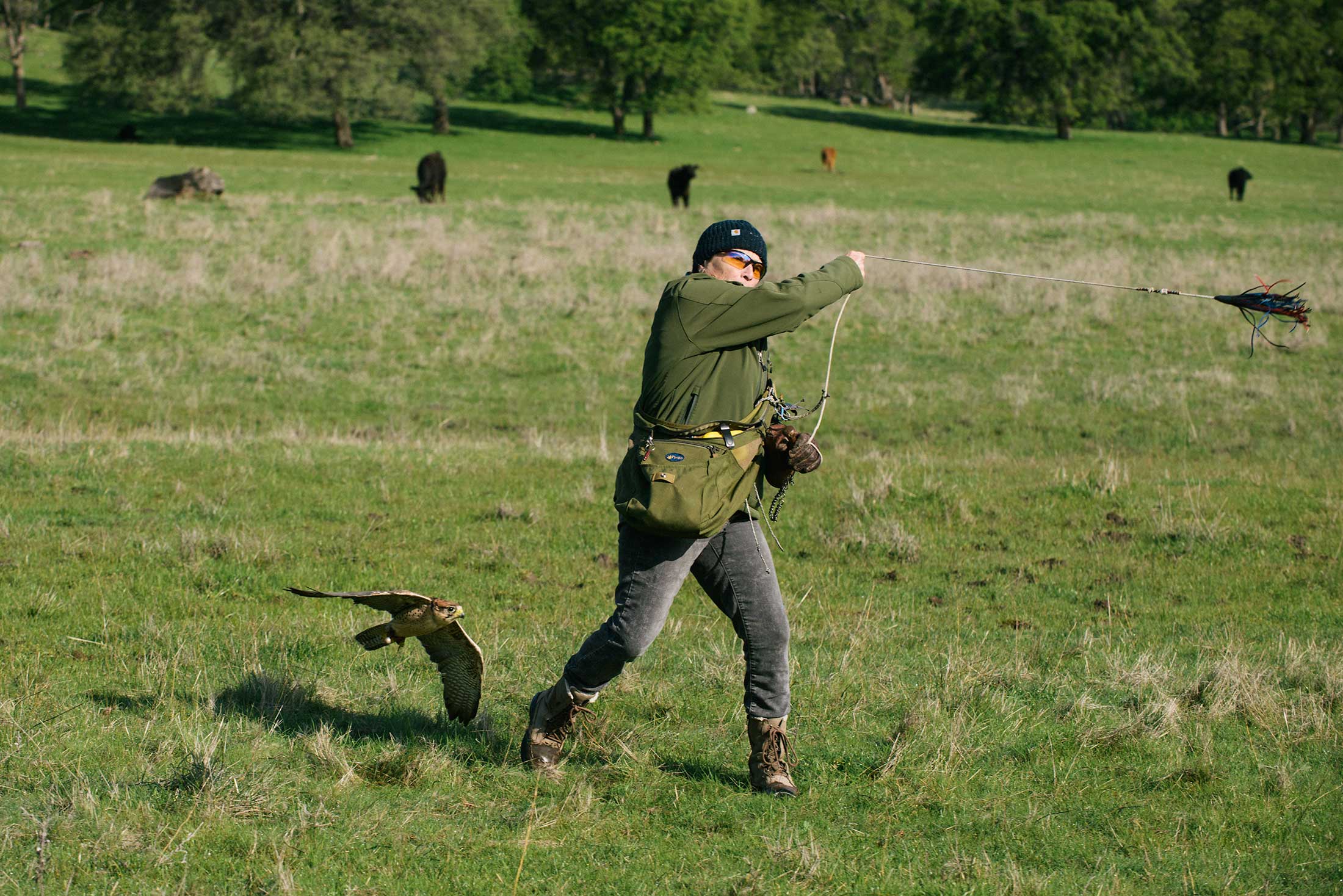 Women have flown birds of prey since the earliest days of falconry, when the nomadic horse-riding peoples of the Mongolian-Manchurian steppe hunted small game with golden eagles in the 8th century B.C. Hundreds of years later, in 355 A.D. Japan, the first person to write about the sport was another woman, Kochiku. Manuscripts from 12th-century England and France include illustrations of women falconers. Queens Anne Boleyn, Elizabeth I, Mary Queen of Scots, and Catherine the Great were all practitioners. 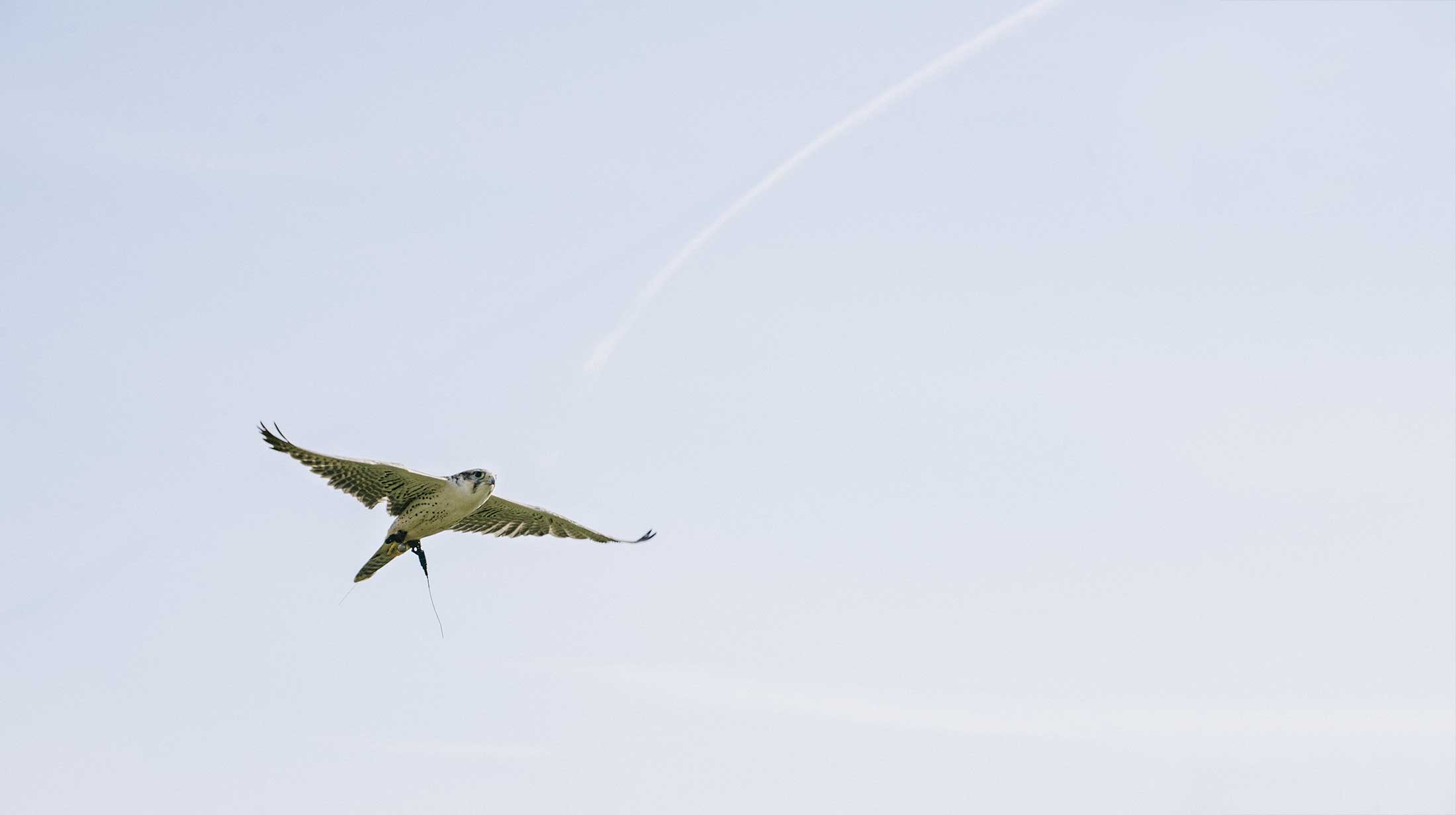 Marden knew none of this when, at eight years old, she stared transfixed by the sight of a red-tailed hawk soaring through the multi-purpose room at her elementary school. As she watched the bird settle on the arm of the visiting falconer, she was in love. But she stayed quiet. “I was a girl in the late sixties, and it was a guy kind of thing,” she says. “I was too shy and too well trained to ask, ‘How do I become a falconer?’”

Lacking a hawk, she says, “I ended up with every other type of bird you could own. Cockatoos, cockatiels, parakeets, lorikeets, macaws, the whole gamut.” She later worked in a string of other fields, including construction, auto-part sales, house painting, and as a copy machine repairwoman.

When she was in her late 30s, a friend told her about a volunteer opportunity with the falconry show at Marin County’s Renaissance Faire. Browsing a jewelry booth after her shift, she struck up a conversation with a stranger about what she’d been up to earlier that day. The man reached into his pocket and offered his card— a master falconer named Earl Walton. He invited Marden to be in touch. “I felt like a door I’d been wanting to walk through most of my life was finally open,” she remembers.

Becoming a falconer is a process as long as it is trying. While still running a dog daycare business, Marden apprenticed under Walton for the required two years, learning to train and care for raptors. In October 1999, she was allowed to trap her first bird. She christened the red-tailed hawk Bean Sidhe, “fairy woman” or “banshee” in Old Irish, a nod to Marden’s Celtic heritage. At last a general falconer allowed to hunt solo, she spent the five requisite years practicing the sport before finally becoming a master falconer in 2004.

The work didn’t end with the title change. In return for its meteoric thrill, falconry demands constant care, hovering worry, and meticulous training. Birds can fall ill, refuse to hunt, grow aggressive, attack or be attacked by wild raptors, or sit in a tree ignoring a falconer’s cajoling for hours. And they can, of course, fly away. “Falconry is a sport that will break your heart in a thousand different ways,” says Jana Barkley, a friend and former employee of Marden’s.

Moreover, Marden found that it was not easy to break into a world rife with what she glibly calls “boy problems.” There was the potential sponsor who spoke only to her boyfriend about her apprenticeship, instead of directly to her. There was the time she was thrown out of a meeting at the men’s only Caledonian Club of San Francisco because they could not abide a woman being in their space. Apprenticing with Walton was a rare boon. “He always treated women with honor,” Marden recalls of her mentor, now deceased. “He was an actual good human being.”

The North American Falconers Association estimates that, today, no more than 20 percent of all American falconers are women; in California, there are just under 150, but over 500 men. But things are beginning to change: Last year’s World Falconry Day, on November 16, was dedicated to women falconers.

The all-female staff at West Coast Falconry isn’t some brassy feminist statement. According to Marden, things just run better. “Most of the guys that I’ve hired get frustrated because they’ve got a female boss telling them what to do,” she explains. “I’d say, ‘Okay, I need you to do this, this, and this, and they’ll decide to do that, that, and this. They think their way of getting to it is better than mine.”

Founding the center in 2005 marked Marden’s transition into full-time falconry, a gamble that she could make a living doing what she loved best while also getting Americans to care about an obscure, sometimes feral sport. 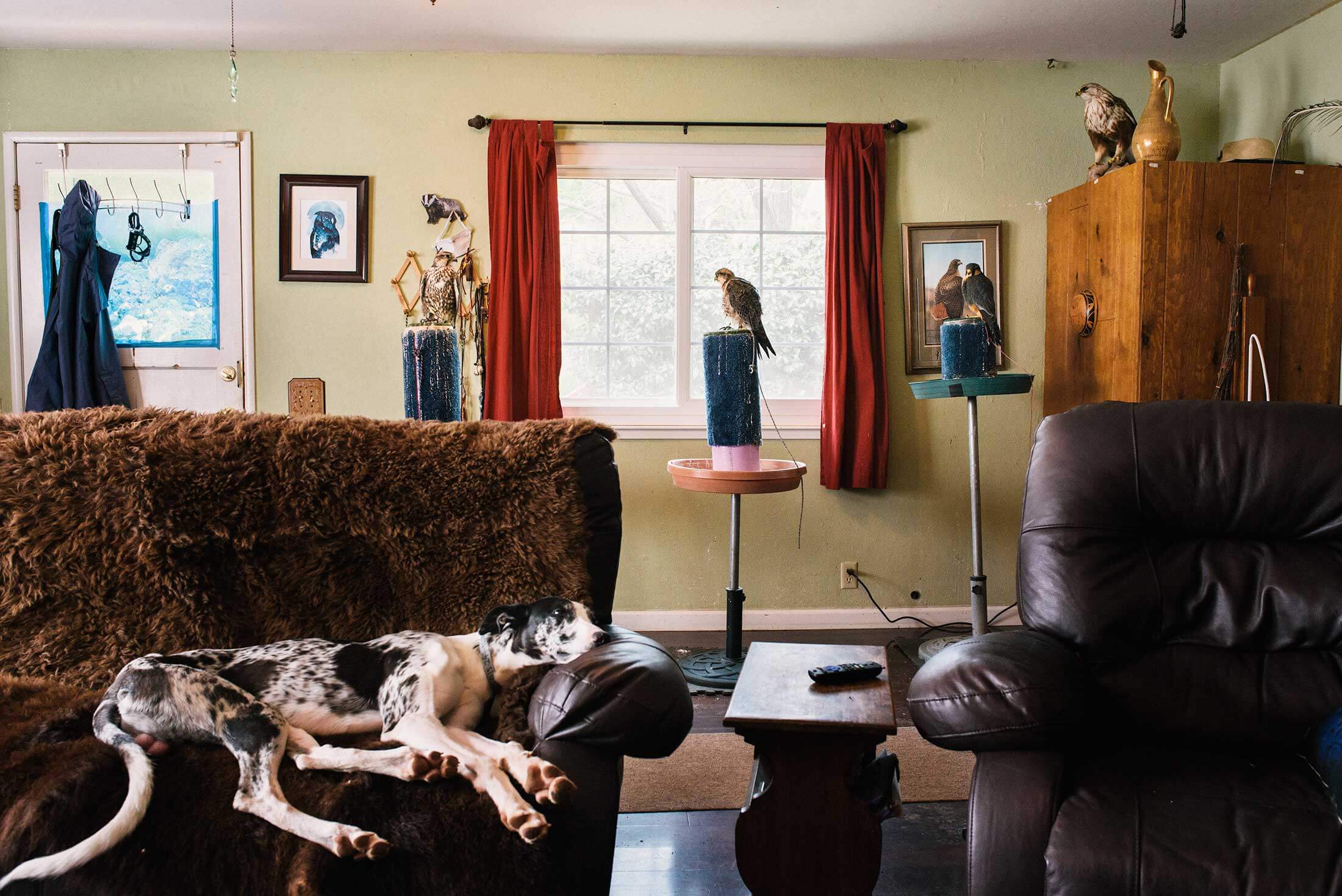 Falcons retire at the end of the day in Marden’s living room, along with her dog Cosmo.

There are canaries in the parlor, cats in the bedroom, dogs in the kitchen, an owl in the guest room, and five raptors in the living room, each bird exquisitely still and razor alert on a perch.

Marden owns 19 raptors total, a mix of hawks, falcons, owls, and one vulture, but there aren’t enough outdoor enclosures yet for this menagerie. So while she builds those, the birds rotate through her living room. 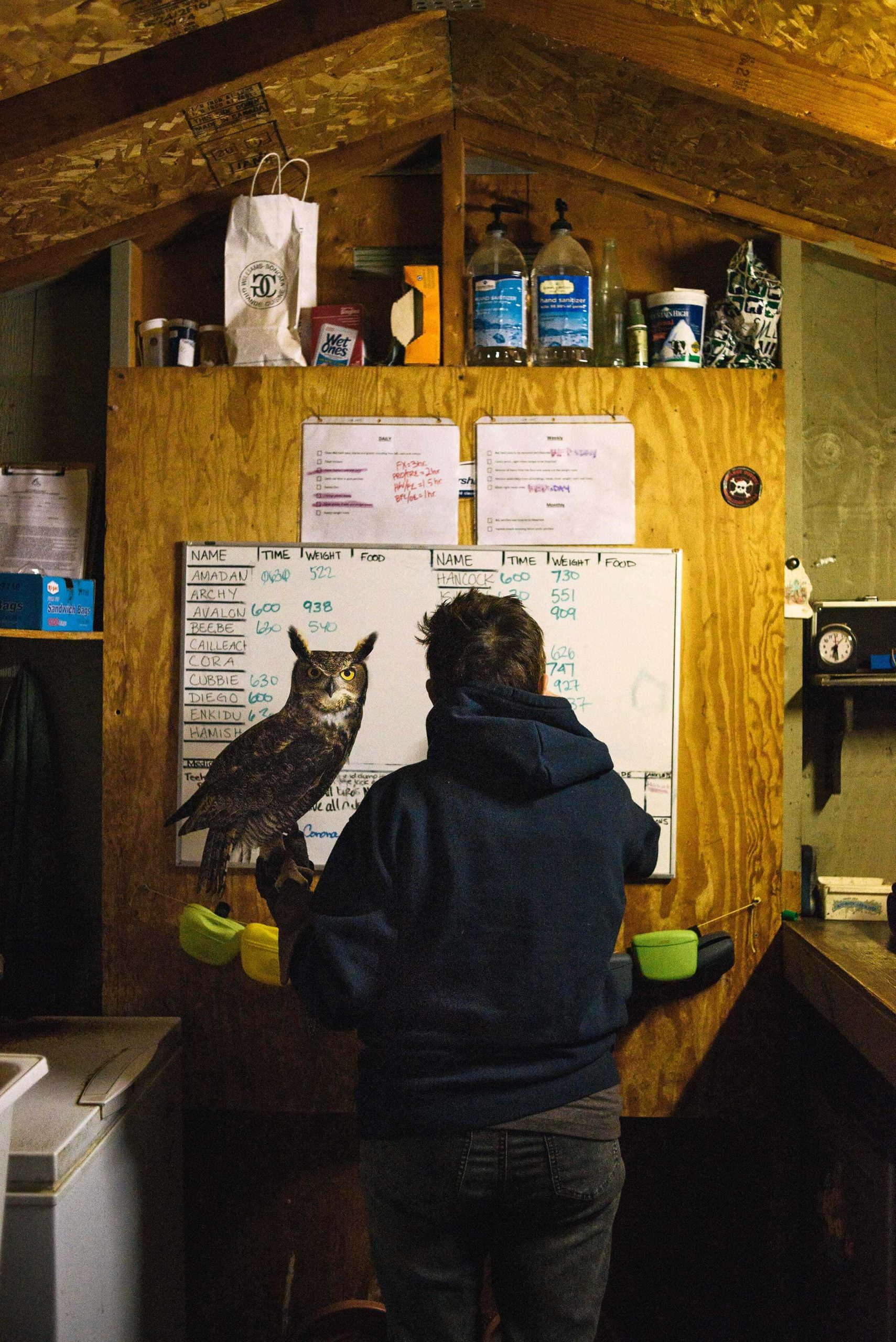 Marden weighs Tigg’RR, a male great horned owl. Weighing the birds is one of the first things that happens in the morning at West Coast Falconry.

Not that she minds: There’s nothing quite like watching nature films alongside hawks that screech thunderbirds when a bear cub crosses the screen.

Marden founded West Coast Falconry when she was still living in Marin County, a place she learned was too populous to fly birds and fostered an antipathy for hunting. But what Bay Area liberalism shunned, Yuba County leaves alone. After moving to Marysville in 2006, her home now abuts 1,100 wild acres owned by a neighbor who welcomes Marden and her staff to fly birds.

Marden’s self-described “right-hand gal” is Amber Kelley, one of several young women the master falconer has taken in over the years. Kelley began working at West Coast Falconry at 13, when she moved in next door. “I’d come over after school and take care of her chickens and pigeons and cats and house clean,” she says. Kelley eventually graduated to working exclusively with the hawks and falcons, a virus she caught from Marden. “She gave me my career, but she’s not just my boss,” she says. “She’s everything to me.”

After two decades of flight, Marden has matured from master falconer to mentor and advocate. Classes, which are open to people of all genders, are only some of what’s on offer. There are also hawk walks, owl encounters, wedding ring delivery by raptor, funeral flyovers, school visits, pest bird abatement, and animal therapy—raptor-based revenue streams Marden calls “preservation through education.”

As the world continues to urbanize, cannibalizing the open spaces necessary for falconry, the sport’s future has been threatened. In 2010, UNESCO designated it an Intangible Cultural Heritage, a sort of endangered species list for human activities. Falconers’ reclusive, cliquish tendencies haven’t helped, and neither have changing social mores about animal welfare and hunting.

Marden hopes to reverse the trend in her own way. “You can preserve something better by teaching people about it than you can by hiding it,” she explains. Her property and home are open to falconers-in-training, commuting employees, curious journalists, and wayward souls, so long as they want to understand the sport. Such appreciation only takes a little bit of exposure, she’s found. “I don’t know anybody who’s not impacted by a bird of prey,” she says. “It rocks something in the core of your being.”

West Coast Falconry is still growing. Marden hopes soon to add flight shows, a mainstay at British institutions, which will allow visitors to encounter hawks year-round at a fraction of the price of lessons. And even more importantly, a foundation, so her staff and mentees can continue what she began. “A future for them to be involved with for life, if they want it,” Marden says. “I really don’t want West Coast Falconry to die when I do.”