The first thing to notice about Gigi Lucas is her disarming, effervescent grin.

Then that vibe that surfers are known for—equal parts easygoing and enthusiastic. Carving her longboard across mellow waves off the coast of Jacksonville, Florida, she’s in her element, yet she’s still an anomaly.

“I’m 5’9” and a solid black woman,” she says. “I don’t get intimidated very easily. The only thing that intimidates me is Mother Ocean. I have a huge and healthy respect for her and what she does.”

Of the 1,349 surfers in the World Surf League (WSL), only 25 percent are female. After 42 years, women secured equal pay in the league last year, a first in pro sports. That same year, women were invited for the first time to compete at Northern California’s legendary big-wave spot Mavericks, after being excluded from contests there since it began in 1999. These are wins worth celebrating. But the barriers to entry for many women—harmful stereotypes, lack of representation and resources, and the general whitewashing of the narrative around surf culture—still persist. 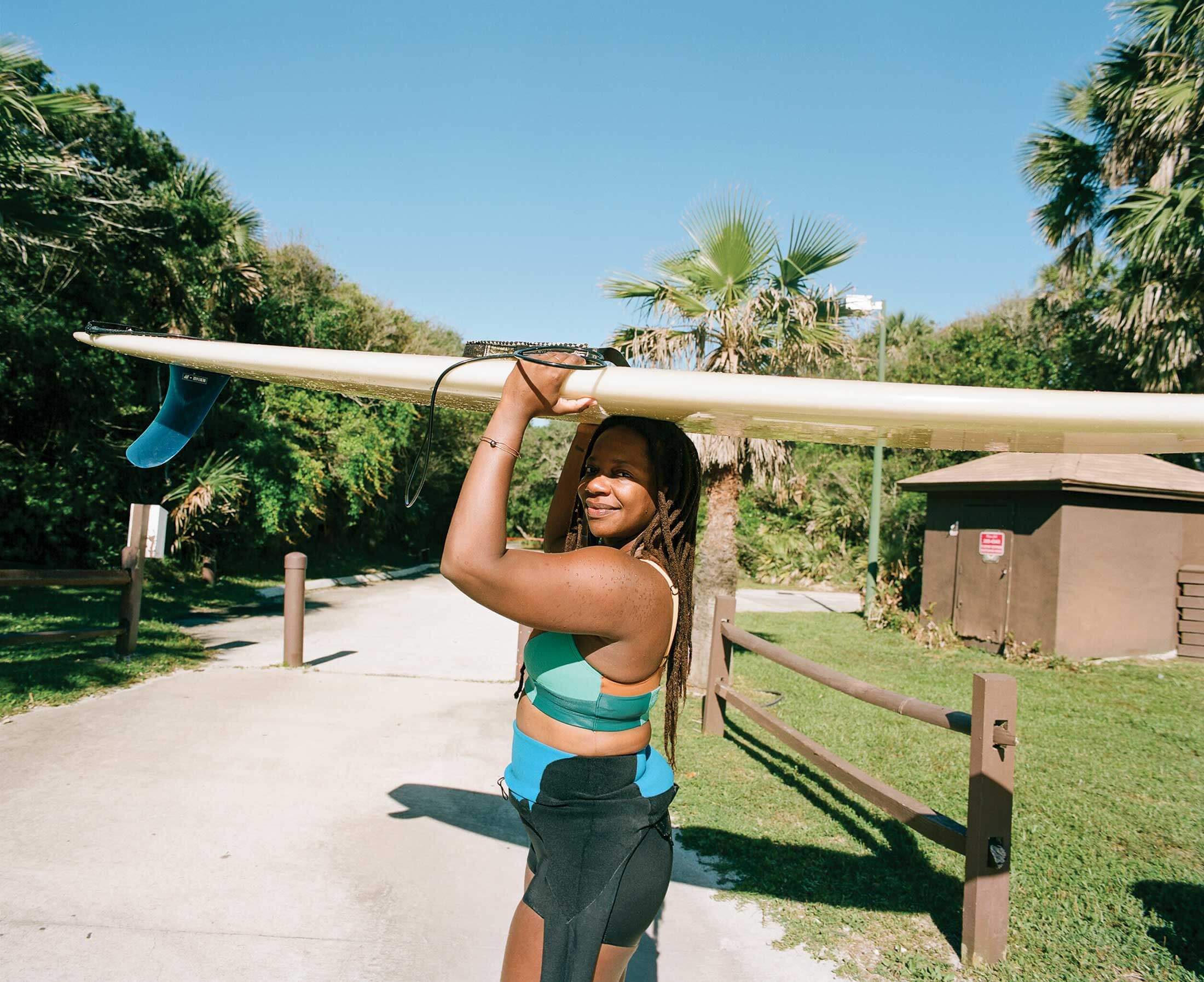 Gigi Lucas walking back to her car after a surf at Hanna Park, Jacksonville, Florida. 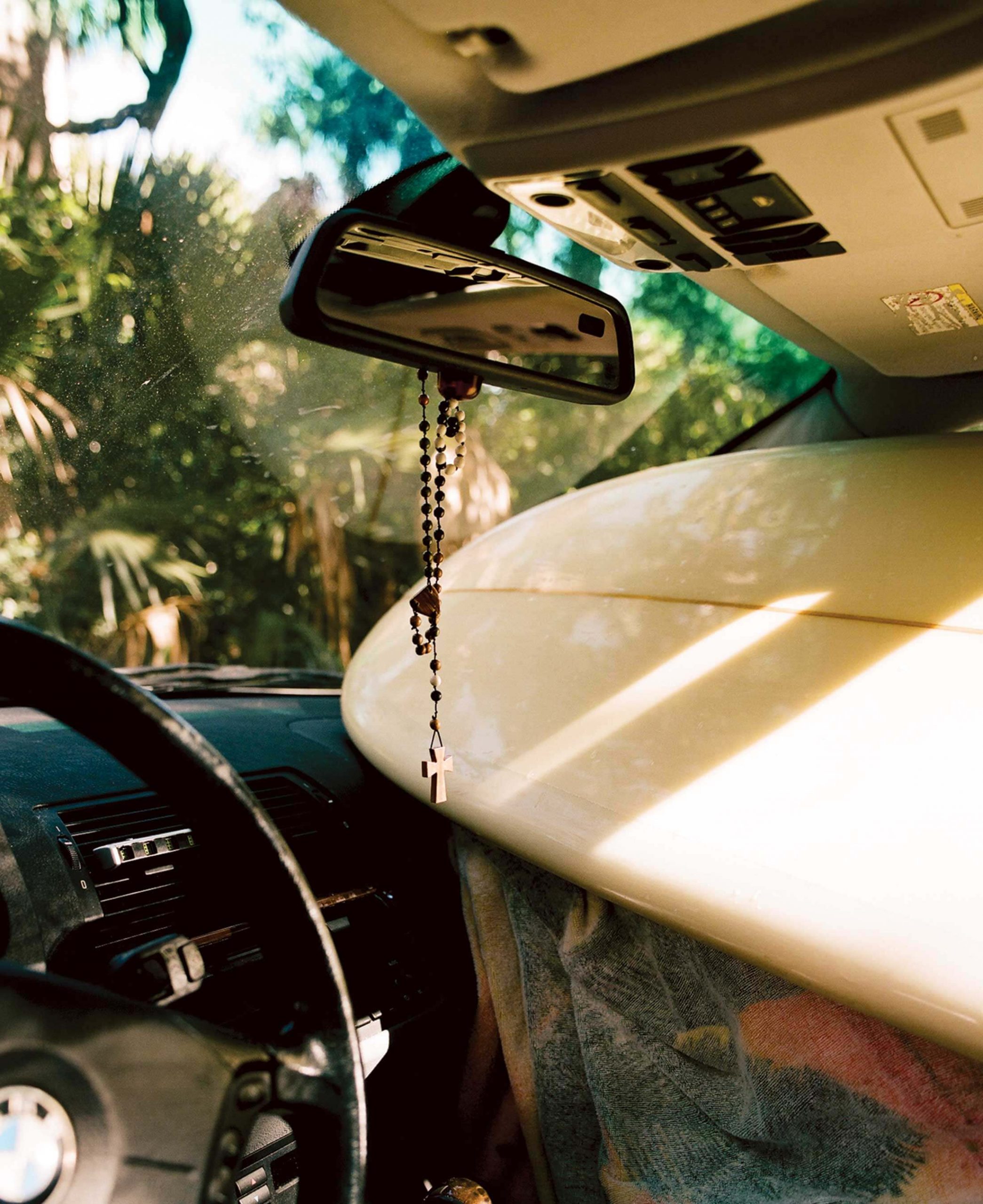 Lucas’s car after the surf.

On the current WSL Women’s World Championship Tour, only a few women look like anything other than the blonde and sun-kissed “surfer girl” portrayed in traditional media. The Western perspective on the history of surfing more or less counts influential women of color on one hand. But female surfers of varying cultural backgrounds have been riding waves since the ancient Polynesians invented the sport. And today, greater visibility of a growing global surf culture has been mobilizing women throughout the world to take their place in the lineup and reclaim their kinship with the ocean.

“Social media and the internet as a whole have allowed us to connect and communicate on a global scale in such a unique and different way,” says Danielle Black Lyons, president of the club San Diego Surf Ladies. “It’s hard to picture something in your mind if you have never seen it before. Now we can see other women of color surfing, swimming, diving, pushing limits.”

For many who surf, their love of the water can be traced back generations. Centuries ago, Native Hawaiian men and women of all classes enjoyed surfing. Cutting koa, wiliwili, and breadfruit trees for carving surfboards didn’t happen without offerings. Surfers prayed for waves and thanked the gods after surviving gnarly wipeouts. This spiritual connection to nature was integral to the Hawaiian tradition of wave riding, which nearly died when colonizers and Christian missionaries from the United States suppressed it (along with other cultural expressions, like hula). But in the 1890s, Native Hawaiians led a resurgence of surfing, which has persisted ever since.

Ha’a Keaulana has been surfing since she was a little girl, and her family is deeply connected to the sport. Her grandfather is surfer Buffalo Keaulana, the first lifeguard at Makaha Beach on Oahu’s gorgeous and gritty west side, and the steersman on the maiden voyage of Hōkūle’a, a double-hulled sailing canoe ceremoniously recreated after the vessels that brought ancient Polynesians to the archipelago of Hawaii. Ha’a’s ohana (family) had close ties with Duke Kahanamoku, the Hawaiian Olympic swimmer credited with popularizing surfing worldwide.

“I grew up in the ocean, and it is just second nature to me,” she says. “I just don’t know anything different.”

In 1835, African surfing was documented in the book Narrative of a Voyage of Observation Among the Colonies of Western Africa by British explorer Sir James Edward Alexander. More than 100 years later, the documentary The Endless Summer premiered and (inaccurately) depicted American surfers Robert August and Mike Hynson arriving in Ghana and supposedly inspiring locals to hit the waves.

Surfing can look exclusive. But that’s not true. Everyone can do it. 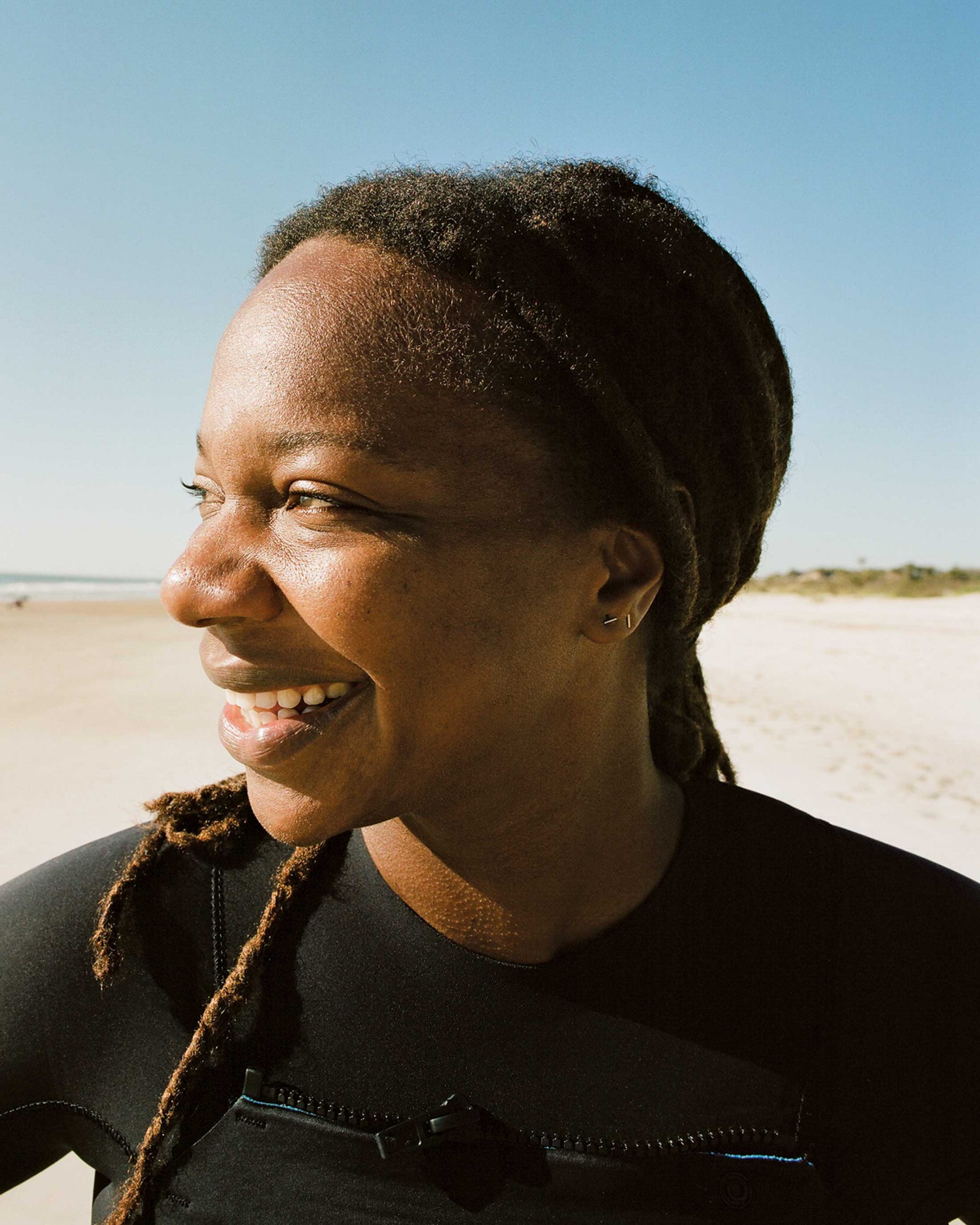 Like the coastal peoples of West Africa, Caribbean islanders have close relationships to the water because it’s such an essential part of their daily lives. “The way of life there is so heavily dependent on the land and sea, and protecting it is a responsibility for everyone,” Black Lyons says. “My dad was a cliff diver in Negril, Jamaica. My mom put my big brother and me on a swim team at age five, and we both worked as lifeguards and swim instructors during the sum- mertime. It always shocked people that a black girl could swim like that.”

The stereotype that black people don’t swim is, of course, false, but also rooted in generational trauma. The 2011 surf documentary Whitewash lays it out: Many of African descent have been affected by their ancestors’ fears of drowning during the Middle Passage of the Atlantic slave trade. Slaves were also forbidden to learn how to swim, because it would give them a means of escape.

Up until the end of Jim Crow laws, and even after, black communities had limited basic access to beaches. And even if one could get a surfboard, those who wanted to compete were faced with fees for competitions, associations, and all the proper gear.

“There are a lot of resources that we don’t have because we just don’t have a seat at the table yet,” Lucas says. “That’s what organizations like Surfear Negra are endeavoring to change.” 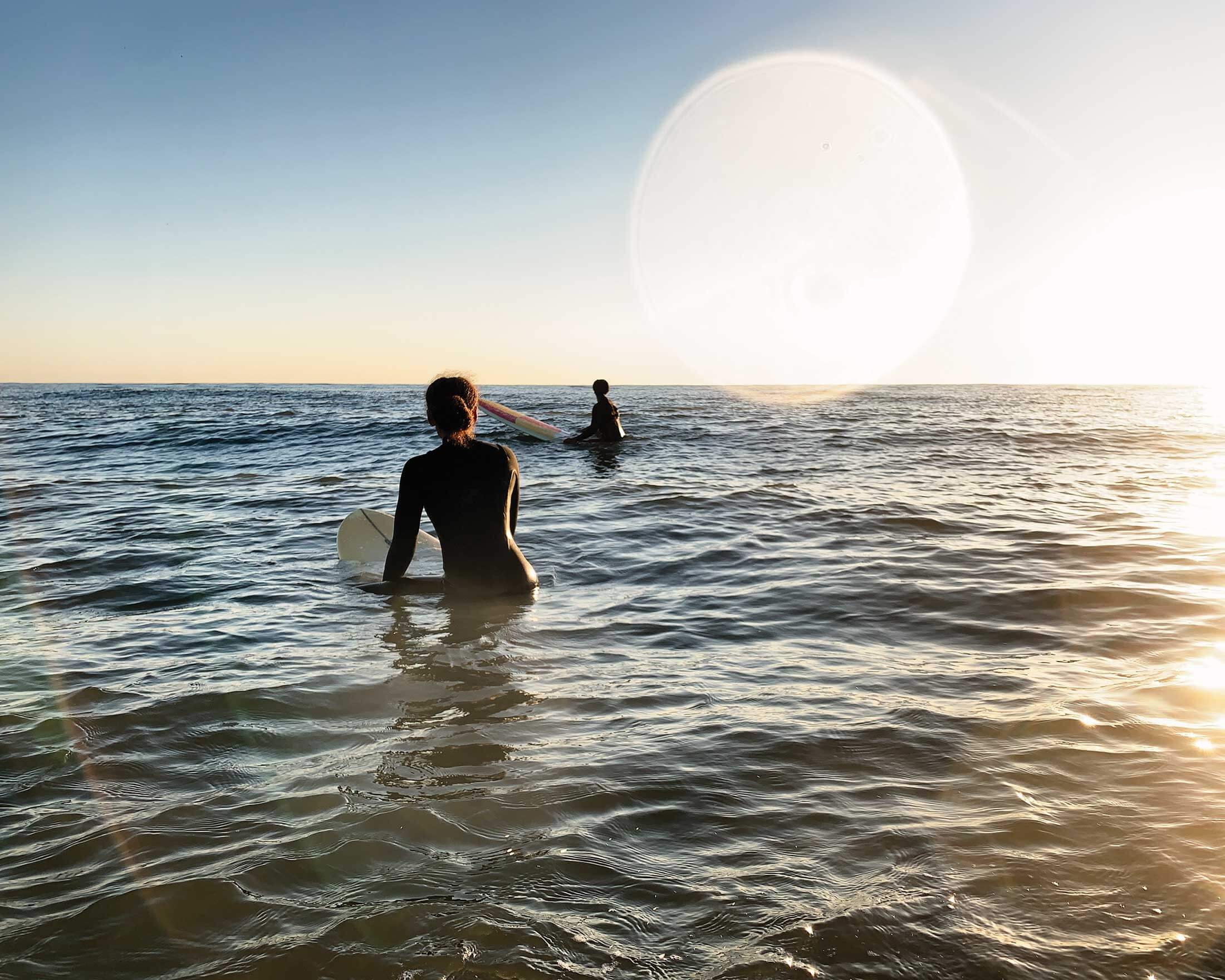 Gigi Lucas and Nina Stouffer sunrise surf at Jacksonville Beach. Stouffer is the first girl sponsored by the ¡100 girls! program. She is currently participating in Surf Asylum’s Spring Surf League. 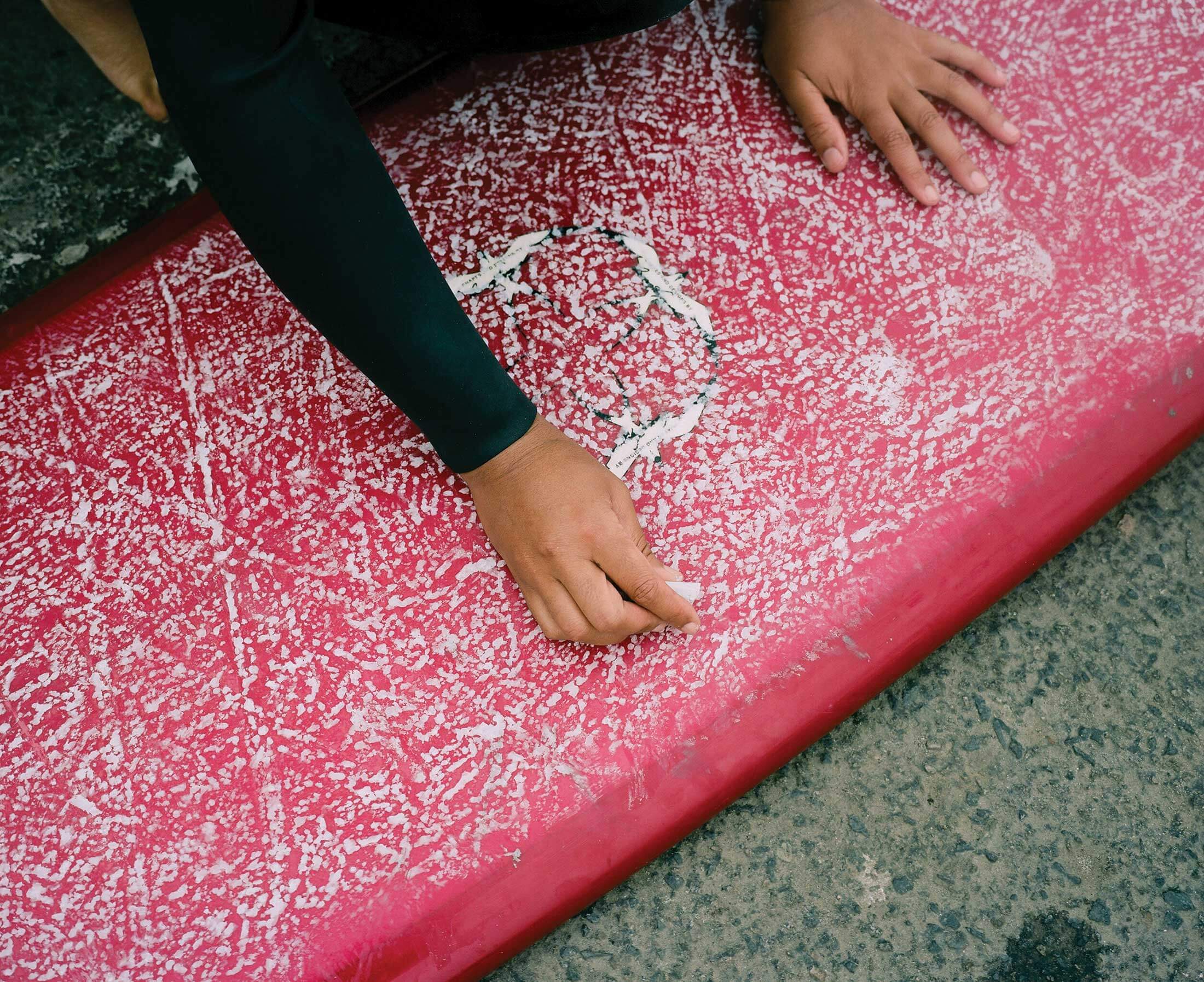 Danielle Black Lyons waxing her board in Oceanside, California. 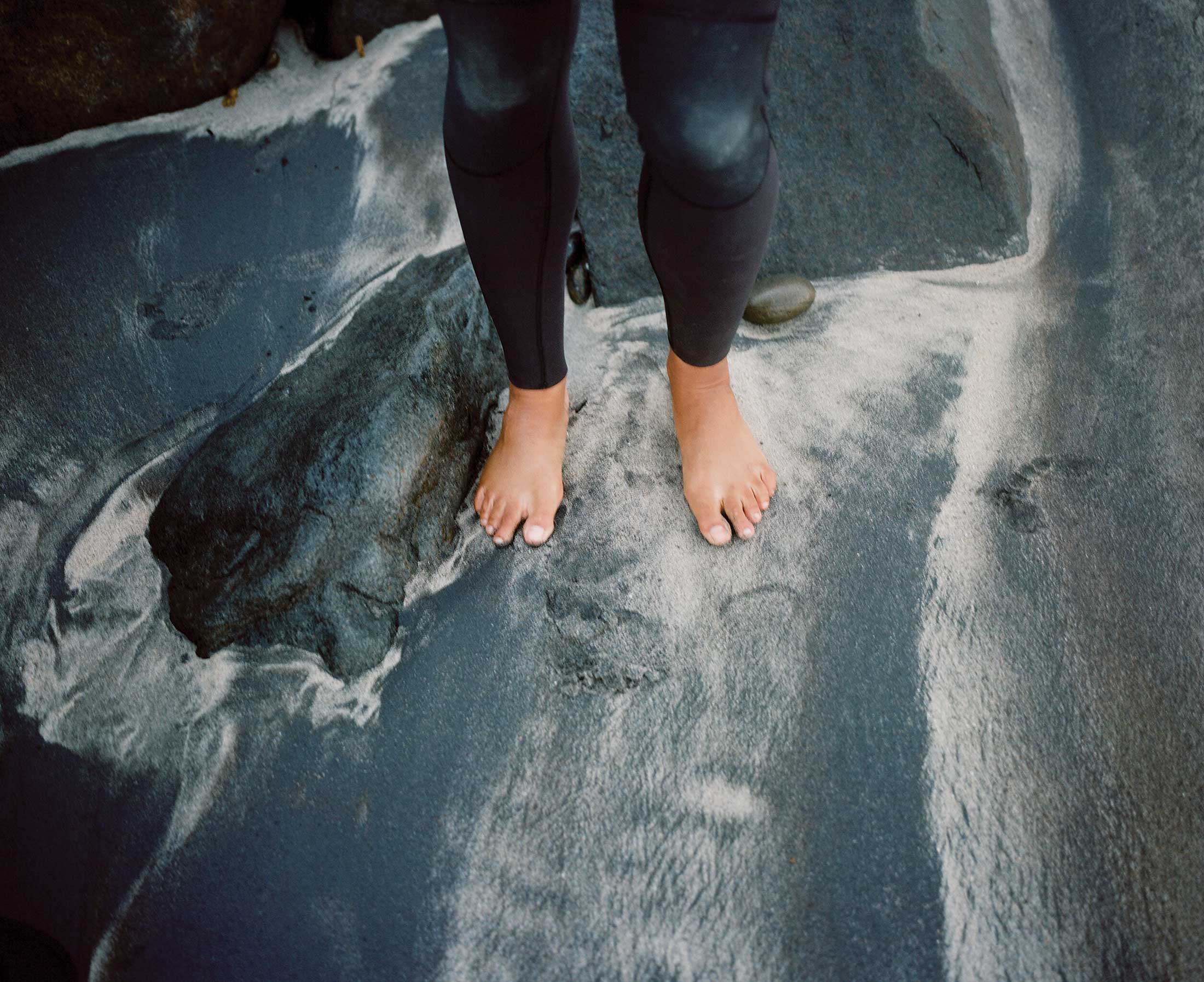 Black Lyons on the beach.

Across the world, female surfers deal with a broad range of obstacles. When Elaine Abonal started surfing 17 years ago in the northern Philippines’ budding beach town of San Juan, La Union, internalized colorism was one of the things that kept her friends out of the water.

“Being ‘dark’ was not considered beautiful,” she says. “A lot of the women were shying away from the sun because of how tan they would end up. Now that there is more exposure of surfing and different kinds of surfer girls, especially Filipinas with dark hair and tan skin, being brown or tan is considered beautiful, even ‘cool.’”

Despite the increasing mainstream appeal of surfing worldwide, the fashionable surfer-girl image is still far from relatable to many women. “I noticed a lot of women lack the confidence to go or even say that they want to learn how to surf,” Abonal says. “I get so many messages or questions [from] women [about] body image—if they need to look a particular way in order to start surfing. Surfing can look exclusive. But that’s not true. Everyone can do it.”

And yet navigating the etiquette and taking up space in a crowded, male-dominated lineup can be just as intimidating as paddling out through breaking water for the first time. “I think people often assume a lot about my surfing based off of my color, my gender, whatever,” Black Lyons says. “I hate feeling like I have to prove myself when I go to a new break, but often times I have to do just that to get respect in the lineup and get my fair shot at waves.”

To sustain a new generation of surfer girls, organizations are nurturing diverse young talent. Since 2012, Oakland, California–based Brown Girl Surf has been hosting seasonal surf days and summer camps for girls and women of color from underserved areas. Surf coach Rhonda Harper founded the nonprofit Black Girls Surf to support black female surfers who aspire to go pro. For nearly a year, she has been training 23-year-old Khadjou Sambe, who might have the opportunity to represent her home country of Senegal when the sport debuts at the 2020 Summer Olympics.

Lucas says that in spite of the challenges, it’s important for surfers to remember why they were drawn to the sport in the first place. “It’s a matter of being honest with each other about what’s going on and refocusing on why we do what we do,” she says. “If we can get back to that then I think that on our journey to diversify the lineup and add more color to surfing, we can bypass some of the negativity.”

Indeed, to most surfers, the sport is not about winning world titles and inking sponsorships. “I think this may be true for everyone who surfs: When they came into it, it was such a primal experience that spoke to the soul,” Lucas says. “For me, it’s a spiritual, mental, and emotional necessity.”

Taking up space in a crowded, male-dominated lineup can be just as intimidating as paddling out through breaking water for the first time. 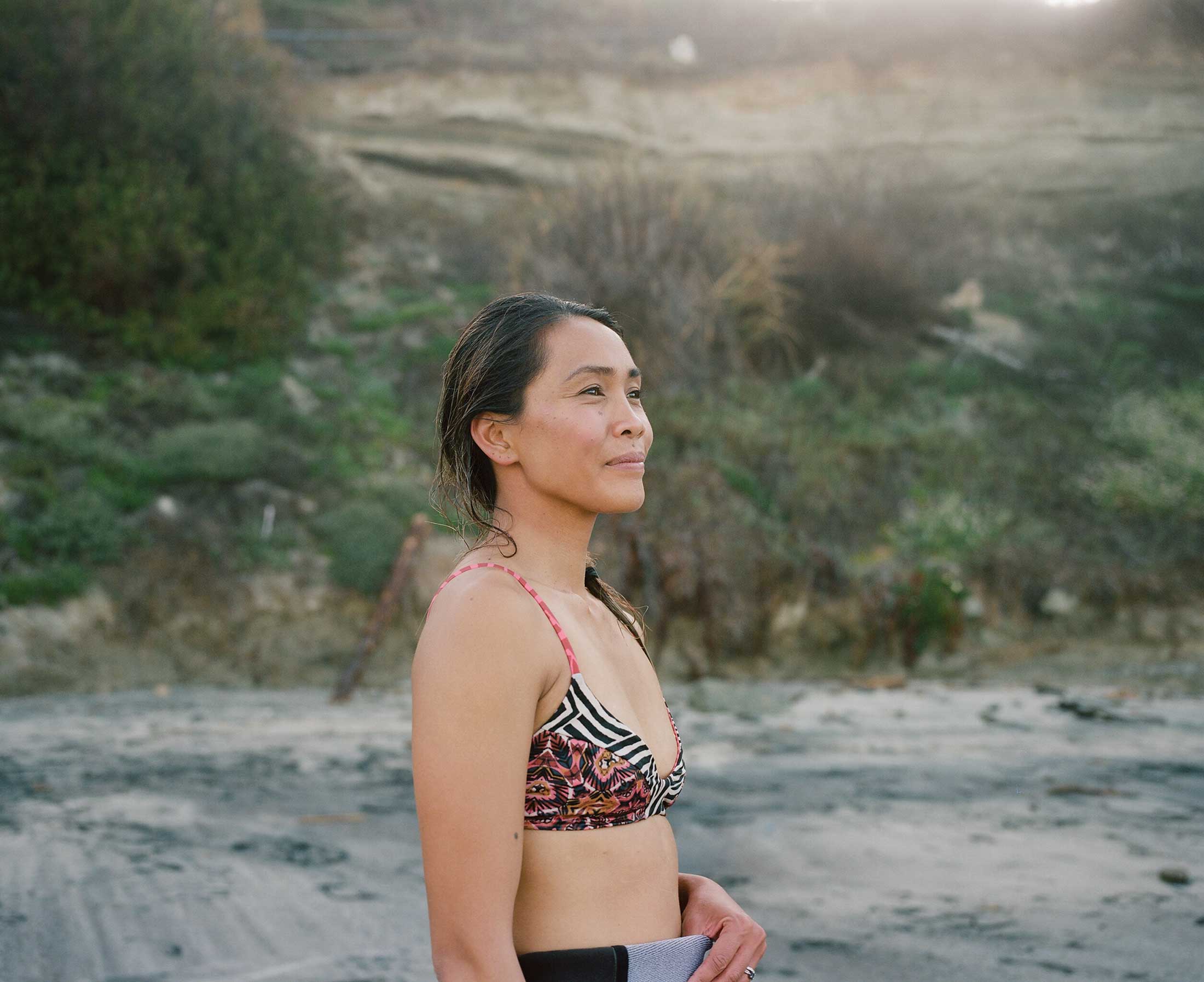 Camille Cunningham on the beach in Encinitas, San Diego, after a dawn surf. She is part of San Diego Surf Ladies.

A growing global surf culture has been mobilizing women throughout the world to take their place in the lineup. 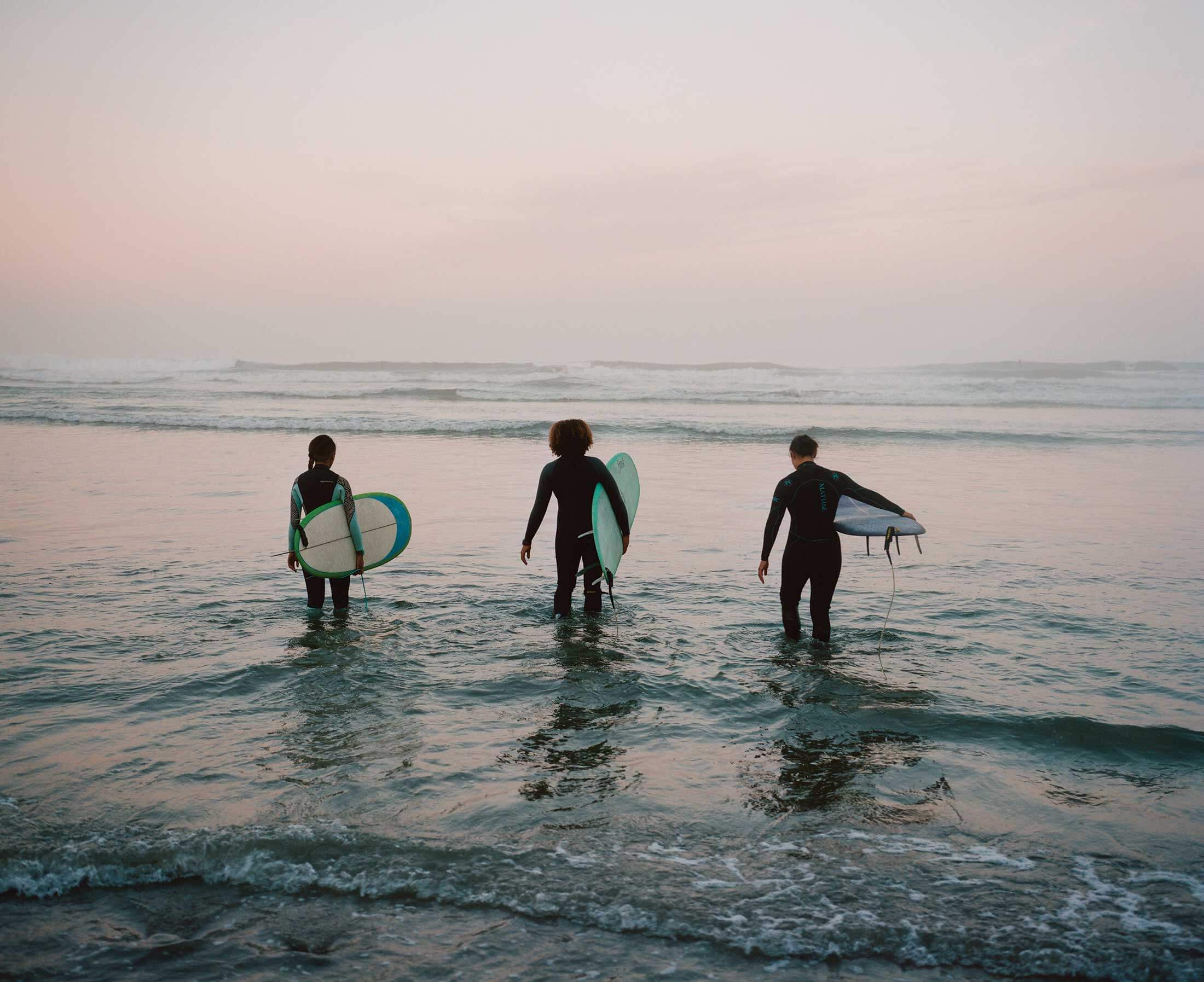