A chef living in Antarctica reflects on watching glaciers melt, the daily risks of living on the South Pole, and what it was like to isolate months before the rest of the world.

While most of the world navigated the isolating effects of the pandemic for the first time this spring, Karin Jansdotter is no stranger to solitude.

She’s been living at Antarctica’s Norwegian Troll Station since November of last year, doing tri-daily weather reports and cooking for the tiny team on the ground with her.

Jansdotter will remain on our southernmost continent until September, after which she’ll make her next move based on the status of the global pandemic. Right now, though, she’s bound to the Antarctic tundra. Nobody can fly in during the polar night: the sun last set in April, and it won’t rise again until August.

Somewhere along the east coast of Central America last year, onboard a Norwegian eco-expedition ship called Hurtigruten’s Fram, I met the Swedish chef, forager and Antarctic weather reader. We wrote to each other for a year, mostly comparing wild swims and swapping travel tales. Jansdotter and I most recently corresponded exclusively for Trix, during which she shared tales of life on the only continent still free from any cases of COVID-19.

Lots of people are still under strict lockdown. But you’ve been confined to the same location for a much longer stretch of time. How do you manage?

I have totally grounded myself into this base. I wrote a “recipe for Karin’s happiness” before I left. Sometimes I go back and look through it and do something that I know will make me feel good. Taking the car out on the only road we’ve got and listening to some music with my journal boosts my energy.

Can you remember when you first realized we were in the midst of a serious global pandemic? What kind of conversations did it spurn at Troll?

I didn’t realize how bad it was until the whole team watched the press conference on March 13. What really struck me was that the Swedish Prime Minister said not to panic. It was like watching a movie.

This massive cold Antarctic desert just sucks the heat out of your body if you so much as take a glove off for a second or don’t cover your face while outside. Don’t think I have ever felt so vulnerable in my life before.

The irony that you’re encased safely on the one continent free of the virus, while your home country has adopted somewhat of a herd immunity approach.

To be honest, I haven’t been watching or reading much news. I did in the beginning, and it made me feel really anxious. I’m trying to be present while I’m here because this will only happen one time in my life. I can’t go home for weeks if something happens to my loved ones.

You’ve been known to swim for minutes at a time in freezing water.

Let’s go back a little. You’re originally from a Swedish, forest-loving family.

None of my family or childhood friends has ventured far from west Sweden. Mum often gets asked: who did she get this from? They love the fact that I’m a bit adventurous.

Where do you think that sense of adventure came from?

The first trip that changed me when I was six, to Mexico’s Yucatan peninsula. I absolutely loved it. I started tasting different foods, and asked Mum to leave me there when they went home. I went back when I was 19 to work and live for some time. 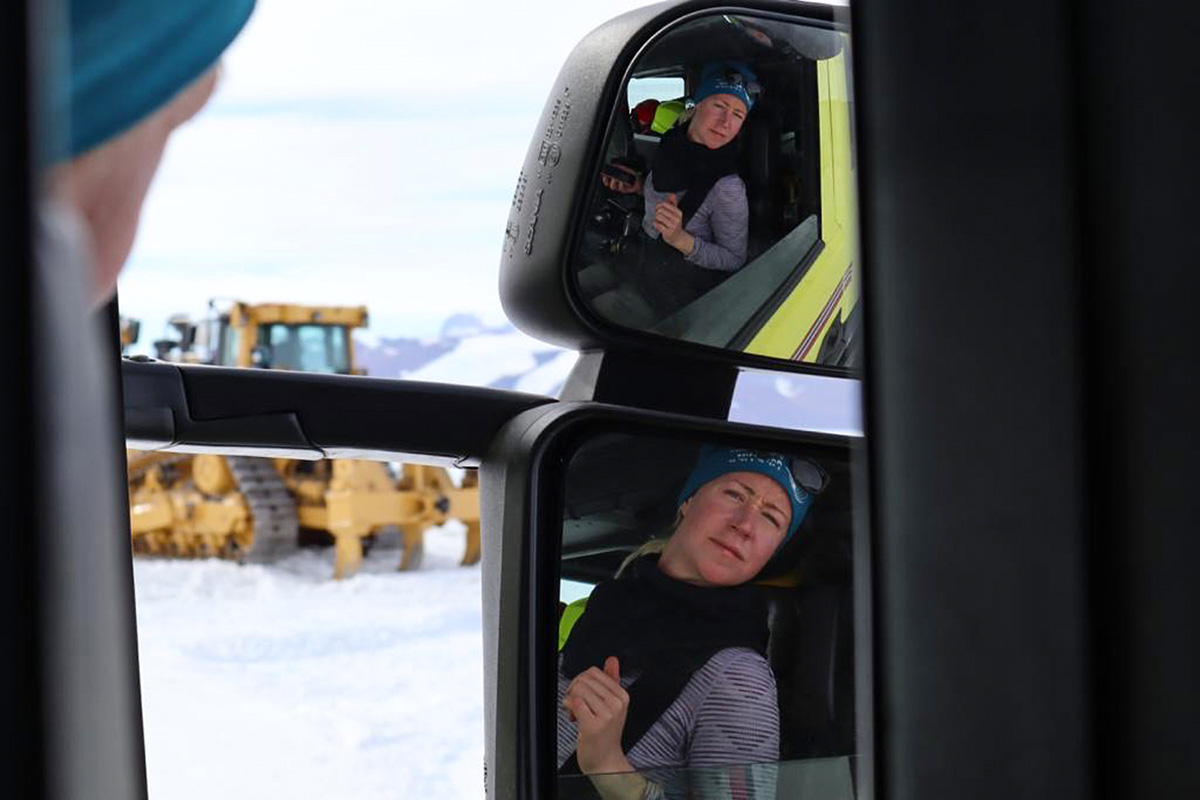 Above: An iceberg near the coast of Livingstone Island, South Shetland Islands, Antarctica. (Photo: Andrew Peacock / Getty). Jansdotter sits in a fire truck during the summer season at the airfield where her and the team are in charge of the fire safety for an airplane that landed that day. Before Jansdotter arrived in Antarctica, she had fire safety training including driving the fire truck and shooting the water canon. (Photo: Alexander Sola)

And then you sharpened those kitchen skills in the wild terrain of west Ireland for a decade. What drew you there?

I received a scholarship to go anywhere in Europe for six months to train as a chef, and I picked Ireland. I saw the country change in front of my eyes over that decade. The legalization of gay marriage, the abortion law changes.

After that came cheffing onboard Hurtigruten, where we first met.

Fjord fetish got me to Hurtigruten. I started working on canal ships when I was 17. Karin Strand, the expedition leader, is such a powerful lady and has been so important for the expedition industry. She makes shit happen, and I like that in women.

Tell me about your love for Adolf Lindstrøm, chef to the Norwegian explorer Roald Amundsen, who first reached the South Pole in a race with Ernest Shackleton.

I started to pick up polar history books, such as his story, “My Life In the Ice.” He made the conquering of the South Pole possible for Amundsen by creating creative and delicious sustenance for the crew. He was a social genius. So while I’m here, I think: What would Adolf have done? He was a man of festivities who liked to highlight occasions. So before I left this time, I bought birthday cards, balloons, and little gifts for the guys on this overwintering team. You really need that kind of treat when you’re isolated for a year.

How did your current gig happen?

I had an urge to do something different with my life. I was chatting with my friend, an expedition guide, about living in Antarctica. I said, “I could do that…do they need people who can cook?” I was at Snæfellsjökull, a glacier in west Iceland, when I found out I’d been hired.

Left: Jansdotter receives the station’s annual shipment of dry, frozen and refrigerated food from Norway in January 2020. Right: Jansdotter makes apple and cinnamon ice cream during the summer season with liquid nitrogen for the base. The liquid nitrogen allows you to make ice cream in an instant. (Photos: Alexander Sola)

Did you do much training to read the weather beforehand?

I did a crash course at the Oslo Meteorological Institute learning different cloud types, and their names and visibility and such. Now I look at the sky all the time, trying to read the clouds. I spot cirrus clouds, polar stratospheric clouds. They can get as high as 82,021 feet.

The day we met in Central America, you shopped and grilled Nicagauran langoustine for us passengers.

It’s really special for me to shop local; that’s a passion for me. Here, I have to be creative with what I have. Can’t visit the local market. I treat food with respect, even if it’s frozen. It’s amazing what you can do with a little butter and mix in some nuts for texture. I have all the ingredients for cooking up some seriously delicious Mexican and Indian dishes. We need a bit of spice in Antarctica to stand the cold!

Could there be anything more romantic and hilarious than you having to go to the South Pole for a year? It’s straight out of a film.

You can’t choose love! Twenty people were up for my job: the most attractive jobs here on the base are chef or mechanic.

I have a front row seat watching Antarctica melt.

What’s the most likely way something could go wrong for you there?

Accidents with big tractors, cars, pist machines or fire trucks being driven on the ice. Or that you freeze to death. Or you go outside in a storm and blow away. Last year the overwintering team recorded winds up to 210 miles per hour. Temperatures get as low as -40 Celsius.

The living conditions must be sparse.

We all have our own bedroom and share a bathroom. The base is run on a generator and solar panels. The fuel comes in with the same ship that brings the food provisioning from Norway. Last season, there were storms that measured triple that of a standard hurricane. We are in a harsh climate and our heat source keeps us alive.

This massive cold Antarctic desert just sucks the heat out of your body if you so much as take a glove off for a second or don’t cover your face while outside. Don’t think I have ever felt so vulnerable in my life before. It’s a good feeling and I have a lot of respect for this icy continent. 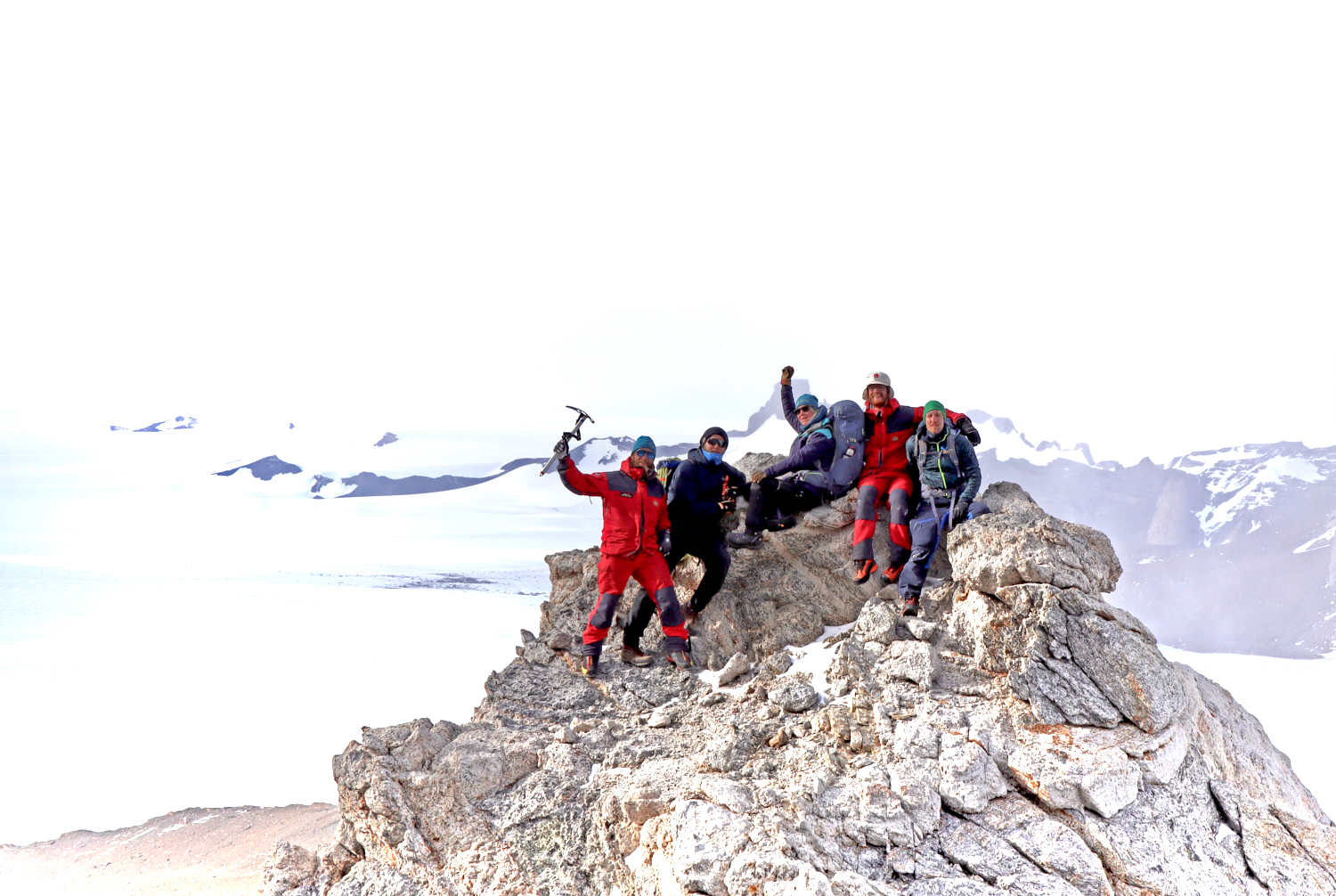 Being there inevitably makes one more conscious of climate change.

I have a front row seat watching Antarctica melt. It was 18 degrees celsius the other day on the peninsula in the west. We are seeing big rivers flowing on top of the glaciers.

Do you pine for anything while you’re away?

I miss moss, bark, birdsong, and the ocean. I have a dream to go to Japan. And to learn about seaweed, and how it can help slow down climate change. I’m in awe of this slimy goodness.

You’ve seen the aurora australis, the green lady, since we last spoke.

I have only seen her once. It’s just the most amazing show that nature puts together. Seeing the southern lights is just so rare, and she’s been a little shy.

What can you hear now if you step outside?

I can hear nothing. No wind. No birds. Windy as hell outside, so the whole base is shaking. I love nature’s force.