Award-winning journalist Laura Dixon spent four days embedded on the Colombian border for Trix, illuminating the human impact of Venezuela’s refugee crisis. Then the world went on lockdown, and everything changed.

Nearly five million people have left Venezuela since the country devolved into political and economic turmoil five years ago—and no country has received more migrants than Colombia. British Reporter Laura Dixon moved to Bogota around the same time, and she’s noticed the influx of newcomers steadily increase since then.

“You’d see full families arriving at bus stations, that was the beginning of the wave,” she says. “It’s started to get more and more intense.”

Still, it’s a story that has gone largely untold. Because the migration didn’t have a direct impact in the U.S. or Europe, it escaped the attention of many international media outlets.

“Coverage has been lacking—there isn’t enough focus on migrant women, and particularly their children,” she says. “Often, the narrative is just about numbers or risk threats. The human perspective is very important. That helps readers understand the reasons why people are moving and what happened to their families.”

Trix published Weight of Two Worlds, Dixon’s sweeping chronicle of one of the most under-reported border regions, last month. In the article, she spends four days following Alba Rosa Gomez, a social worker and relentless advocate for migrant women, as she meets with her clients and juggles troubling cases.

Just a before before Dixon’s article was set to publish, the pandemic sent the world on lockdown, reversing migrant flows back towards Venezuela. Though it’s been challenging for her to reach sources directly, she quickly pivoted, contacting Colombian officials and conducting last-minute research to adapt the story based on the pandemic’s impact on migrants. As COVID-19’s global impact continues to evolve, Dixon spoke to us about her experience rewriting a complex story from afar, in the midst of her own migration back home to the U.K. 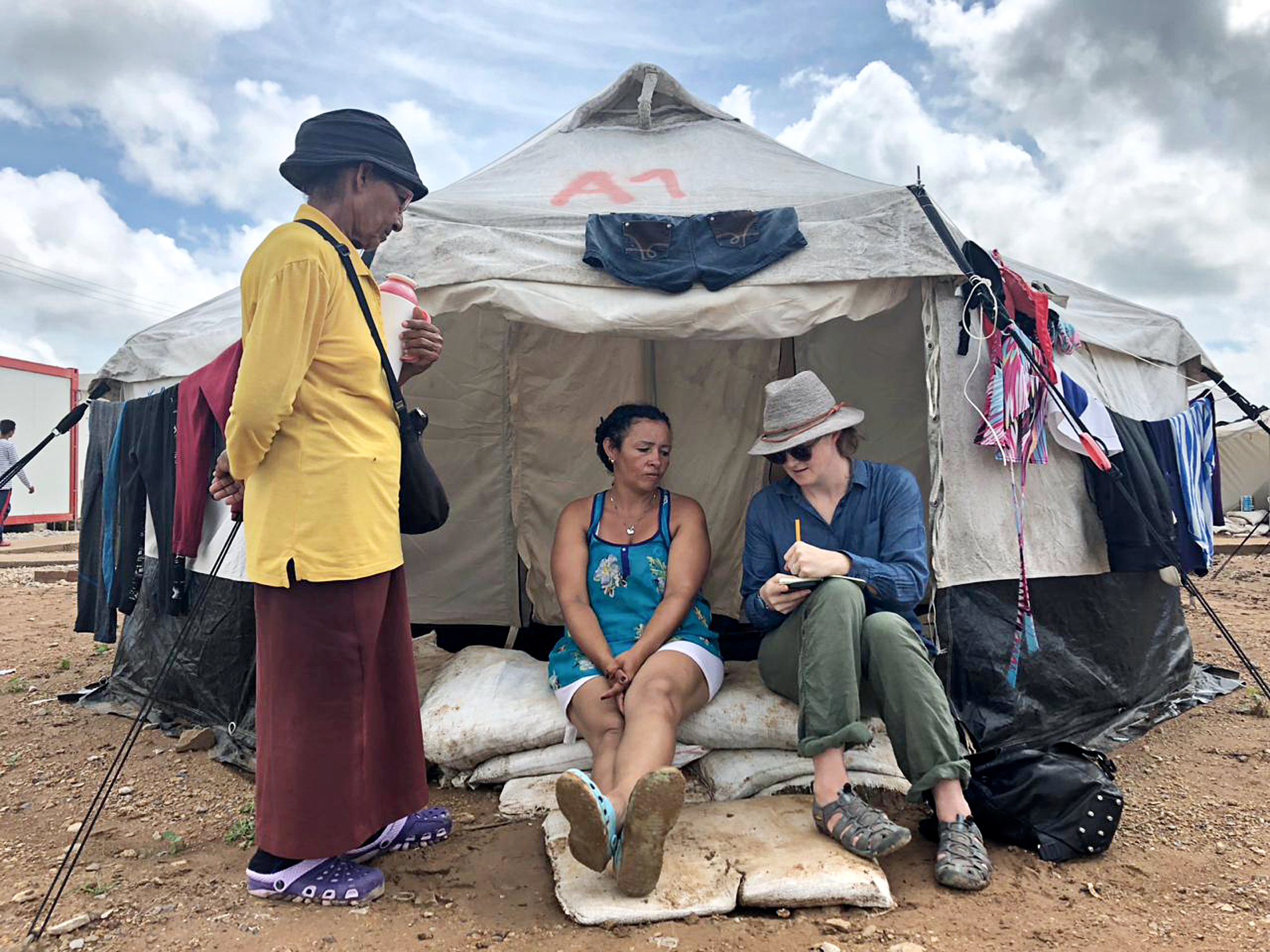 Laura Dixon interviewing two migrant women from Venezuela who were staying at a UN camp in Maicao, Colombia. Photo by Erika Pineros.

You were embedded in the region in February, and the global situation quickly changed. How did you pivot your reporting to include the impact of coronavirus?

I was in Bogota, and they started closing the borders. They were closing schools. I realized that with my family situation, I wouldn’t be able to report on the coronavirus down there. So I came back to the U.K. It’s hard being far away now; a lot is happening in Colombia at the moment and the lockdown has been really hard. Migrants are reportedly walking back to Venezuela. I’d like to be back there on the border, but it hasn’t been possible. I fear that for people, like the migrants I spoke to who were already living such precarious lives, it’s been an unmitigated disaster. I have no way of getting in touch with them. A lot of these women don’t have phones. You can still connect with official-level people; the person I spoke to in order to update my story was not based on the border.

You met Gomez, the main subject of your article, on a chance encounter in an airport.

We just got to talking in the queue. She was transporting a migrant to another region of Colombia for healthcare treatment, and I was coming back from a different reporting trip, when I met her. She was very open and generous, and we decided to keep in touch. It was always really good to hear from her and learn about how things were changing at the border. She always talked about the women and children she worked with; it was an important story that not enough people knew about.

Social workers like Gomez interact with populations experiencing collective trauma on a daily basis. What was it like to experience her work firsthand?

What she does day in and day out really impressed me—the scale of the challenges people like her are facing. There’s gaps in responses from the international aid community, and they’re not receiving nearly enough money. People like Gomez show the difference that individuals can make. She’s very impressive: calm and professional, but also very human. She takes a deep breath each night and gets back to finding who she is. The emotional toll must be immense.

You’ve described as unforgiving the destitute conditions that some of these migrant women live in. That must take an emotional toll on social workers like Gomez who work there day in and day out.

The poverty really hits you in the face. It’s a huge population that’s really struggling but has no other options. You see people on the streets, children begging. Settlements popping up on the edge of town. It’s a hot, unforgiving desert, and people are scraping by on what they can find. Bits of cardboard, old planks, their belongings hanging from a stick from a tree. I spoke to one mother in a UN camp who came because she couldn’t find any food in Venezuela. She had to liquify fruits in a blender for her daughter, who had microcephaly caused by the Zika virus. Her daughter weighed less than her baby.

And their situations are heart-wrenching: rape, intractable illness, neglect, starvation. What was it like getting these refugees to open up and share their stories?

I haven’t found one migrant or refugee who hasn’t wanted to tell me their story yet. They’ve been very generous and keen to show how their lives have changed so dramatically. People who were teachers and nurses, who had houses and whose children went to school. Up until things got so bad in Venezuela, it had been better for many people, especially the most vulnerable, just to stay put. But now, they have no other options. To hear what it used to be like contrasted against how they are living right now helps people to understand the human impact of a national crisis like the one Venezuela is going through.

You’ve been hired to cover this region by publications like the Times and the Washington Post, and received grants from the International Women’s Media Foundation. Many of your stories specifically focus on women.

I worked on a story about women who come to Colombia to give birth, and the impact that has on local hospitals. The picture they paint of the health care they might receive in Venezuela is terrifying, as the Times recently reported. They needed to bring their own gauze and gloves, and the conditions are filthy. Colombia has opened their facilities for free emergency health care, but it’s putting huge pressure on resources. I also wrote about a woman who runs a cemetery and buries people who haven’t been claimed or whose families can’t afford a burial. For the past several years, a huge percentage of the people she’s been burying have been migrants. I’ve met some strong and very impressive women doing work out there.

It’s striking that while so many other countries are implementing policies that prohibit refugees from crossing their borders, Colombia is doing things like providing free health care.

Colombia’s reaction to the crisis has taught me a lot. As a country, they’ve been so welcoming: both individuals and the government. Rather than stopping people from coming in, they’re trying to help. Offering emergency medical supplies, getting kids to school. It’s so different from how other countries are dealing with these crises. It’s important to show that there are alternative ways to handle this—that you can have a positive impact.

Gomez commented to you that she fears many people in the world don’t have emotional capacity to hear about yet another refugee crisis, especially given what’s happening in Syria. But your piece ends on a note of hope.

I’ve met so many inspiring people while covering the region. All of these women have individually managed and coped with immense stress and trauma. They’re still fighting for their kids and trying to make their situation better. People who have done everything right get stuck in this position through no fault of their own. So many of them have just kept going. Every day is a battle: one woman started crying when she talked about her daily walk to the soup kitchen. It’s an hour each way in the heat, and she would have to coax her children along, and then they would just stand there waiting for it to open. It takes a lot of courage and bravery. Many extraordinary women are adapting and finding resilience where they can.