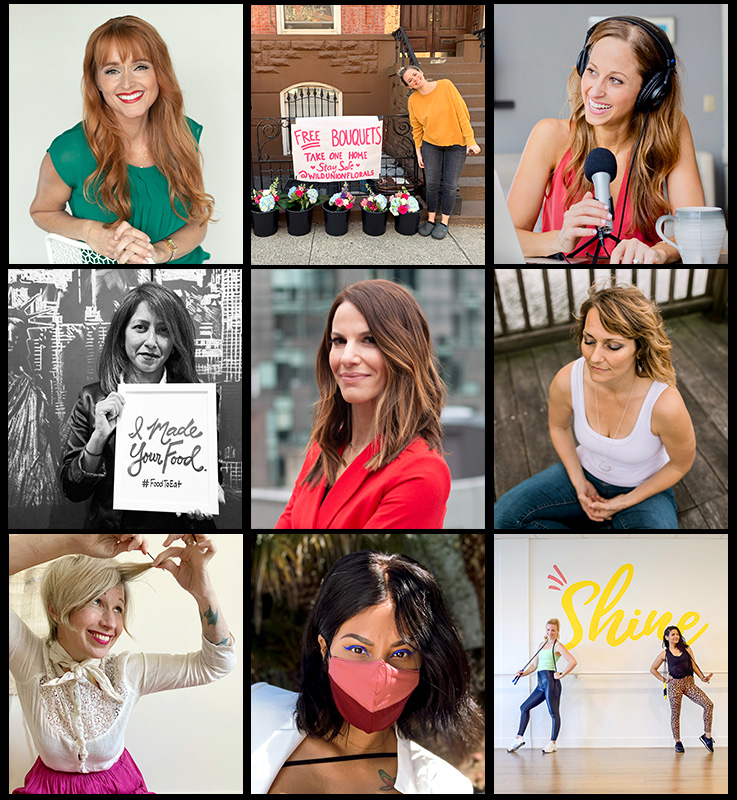 The pandemic has forced many women-owned small businesses to make quick pivots. The ones that are thriving meet a very specific need.

On March 21, the day after Governor Andrew Cuomo placed New York State on lockdown, Laura Balzan, a former teacher, stepped out of her Park Slope, Brooklyn apartment with four buckets full of flowers and a sign that said “Free Bouquets, Take one home (and) stay safe.”

Balzan had recently started Wild Union Florals, a floral design business, with her first pop-ups and events—like weddings and engagements—on the books. Then, the pandemic confined New Yorkers to their homes.

Meanwhile, a metropolis worth of cut flowers began wilting, as distributors shut down amidst the pandemic. Armed with hydrangeas, roses, larkspur and protea she’d procured, Balzan gingerly placed the buckets on her stoop and retreated back inside her front door to see what would happen next. Moments later, the neighbors started arriving.

“Through their windows, people across the street saw me put the bouquets out,” she says. As minutes turned into hours, the bunches were flying off of her stoop so fast that Balzan had to move assembly from her desk onto her doorstep to speed things up. At one point, a line ten-people deep stretched down the block. Four hours after she began, Balzan had given away about 50 bouquets, met many of her neighbors, and gained dozens of new followers on Instagram. At that pivotal moment, her business was beginning, not ending.

Now, two months later, Balzan has a completely different business model than the one she imagined pre-pandemic. Instead of catering to specific events, each week, she continues to sell out her local, Long Island-sourced flower “stoop bouqs.” The customers, many of them from her neighborhood, order online and pick up from her front steps. “Some of the customers tell me that getting the fresh flowers is the highlight of their week,” she says.

With her willingness to adapt to emergent customer needs, combined with practically zero overhead, Balzan joined a growing swath of women-owned small businesses that have found a way to not just survive, but thrive in the COVID era.

There are 12 million small businesses with female proprietors in the United States today. In fact, most women entrepreneurs are small business owners: only. 01 percent have more than 500 employees, according to the U.S. Small Business Administration Office of Advocacy. Their average annual sales hover around $1.3 million, enough to keep about eight workers employed.

The pandemic has proven to hit hardest those that are most vulnerable. Small businesses, in particular, don’t don’t have the same safety nets as large corporations. For women business owners, that vulnerability is a distinctive threat. According to UN Secretary General Antonio Guterres, women are more likely to be saddled with disproportionate amounts of domestic work and childcare, compounded by lower wages and less job security.

But recent observations that countries run by women are faring better in the pandemic also hints that women business leaders may be particularly well equipped to adapt in these times.

It’s well researched that women invest higher amounts of their earnings into their families and communities than men. And Pew Research shows that there’s a perception that women leaders are more risk averse, but also more compassionate and better at making compromises. All of those characteristics, generalizations or not, may be to women’s advantage right now. The current economic climate shows most consumers acting more conservatively than ever, gravitating towards brands that are doing good for society.

The companies that are winning now are the ones who already service the bottom three quadrants of Maslow’s Hierarchy of Needs, or those who have adjusted to do so.

Business coach Carolin Soldo, who runs what Inc. named one of the fastest-growing women-owned businesses of the past year, tells Trix that she’s witnessed incredible adaptability from women business owners during the pandemic. One of her clients, Soldo says, was formerly a teacher’s consultant who was able to successfully react to the pandemic squelching her business by offering something free. She began posting resources to help teachers adjust to web-based classrooms. Now, two months into the pandemic, she’s launched a new business as a consultant in the field of virtual learning.

More conservative messaging has also been key during the pandemic, Soldo says. “We did a big check of all the messaging we were doing to make sure it was really on point, really acknowledging what was going on out there,” she says. At first glance, the types of changes seem to favor the compassionate, risk-aware styles women are already known for.

“People are shifting toward thinking about safety a lot more,” Soldo says. “Before, we would say things like ‘double your business with ease and excellence, working half the time’ or talk about ‘massive growth.’” But as the pandemic spread, she says, “That was not really what people wanted to hear anymore. They wanted to hear about certainty, protecting, stabilizing, immunizing their business.”

These kinds of pivots to fit the practical needs of the moment. And that’s something that Karen Cahn, a tech industry veteran, investor, and founder CEO of IFundWomen, a Kickstarter-like platform, has also seen. “I find that women start businesses to solve real problems,” she says. Over the past weeks, she’s watched IFundWomen entrepreneurs adjust and help lift others up with them. Those who are doing the best are the ones that service the most basic human needs.

“The companies that are winning in general now are the ones who already service the bottom three quadrants of Maslow’s Hierarchy of Needs,” or the ones who have adjusted to do so, Cahn says. “Things like air, water, shelter, sex, food delivery, PPE (Personal Protective Equipment)— the things you need to have.” 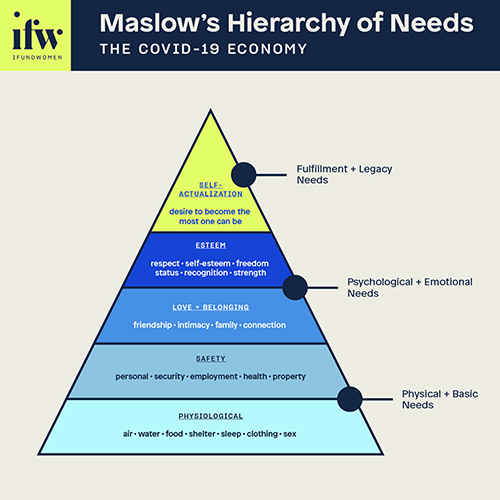 One Oakland, California-based independent clothing designer, who usually makes affordable luxury clothing, recently created a campaign on IFundWomen for a line of get-one-give one stylish face masks that allows buyers to protect themselves and help others. The campaign, called “Pivot into Purpose,” has raised nearly $34,000 of its $45,000 goal. Food to Eat, a woman-run New York-based company whose corporate catering gigs for immigrant and women-owned restaurants have dried up since the pandemic, pivoted to help essential workers. Founder Deepti Sharma says her company had been keeping restaurants in its network afloat by feeding workers in hospitals, nursing homes, and shelters.

Not all business owners have undergone profound metamorphosis to stay relevant. Some women found that minor adjustments for advertisers were more important than changing their products or services. Reporter Erica Mandy created her ten-stories-in-ten-minutes podcast news show, The NewsWorthy, to help listeners “stay informed, not anxious.” But when the pandemic hit, she saw two major sponsors cancel their slots for May and June. “It felt like a really big deal, so we immediately started thinking about what sponsors could take their place,” she said.

One of the cancellations had been from online retail store cutting its budget, the other a meal delivery service that didn’t need advertising because it was suddenly overwhelmed with orders. But Mandy knew her ad slots were valuable: She’d previously been sold out for 2020. So she contacted her ad agency with ideas about other companies with goods and services who her listeners needed most. “As a business owner, I don’t just want to rely on someone else to take care of those things, that’s why I reached out and gave them ideas. I also brought up to them the fact that so many more people are looking to take on a new hobby right now.”  With the help of the agency, Mandy quickly replaced her open slots with ads from an internet service provider and an online classes platform that helps people learn new skills and hobbies.

Katie Krimitsos, a guided meditation creator and former women’s coach, thinks her newly adapted business could be a bridge for other women looking to make changes. Her Women’s Meditation Network, which pivoted to focus on pandemic-specific exercises over the past two months, has seen its listenership double between January and April. She said she hopes that the meditations help women get through this time by clarifying their inner guidance.

“Especially right now, there is a huge amount of external noise going on,” Krimitsos says. “If business is drying up, what if you get quiet with yourself and listen? That is when we see the truth of what the next right move is.”