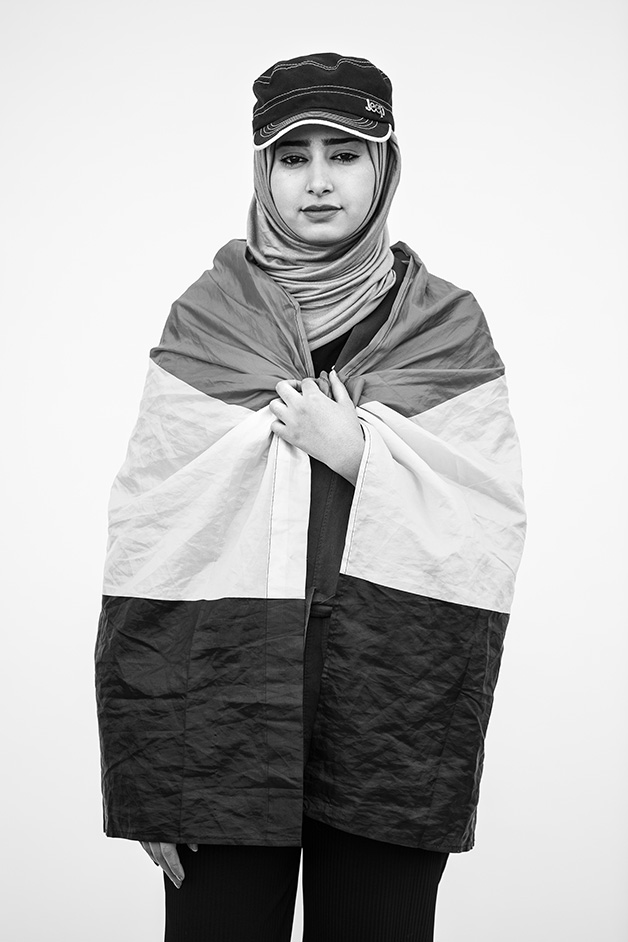 Voices of a Revolution

In a society that’s challenged their rights for decades, young Iraqi women are defying traditional gender norms to protest government corruption and demand a better future for their country.

This past February, Iraqi women galvanized in response to Shia leader Muqtada al-Sadr’s call for gender segregation in anti-government protests.

They marched in what many said was the first women-only protest of its kind in Iraq’s history, carrying signs that said said “Women Rule the World” and chanting “Stop discrimination against women!”

The march came amid daily demonstrations on Iraq’s streets, where since last October, protesters—led by teenagers and students—have been speaking out against government corruption, high unemployment, substandard public services, and foreign influence. Despite violence, kidnappings and  thousands of deaths, the threats and intimidation by opposing forces seemed to only strengthen the protesters’ resolve. But when COVID-19 hit Iraq in March, the government implemented curfews and banned large gatherings of people, bringing the surge of  demonstrations to a grinding halt.

But the sweeping impact of earlier protests continues to challenge and, in some cases, upend the status quo. Last week, Iraq’s government appointed new prime minister, Mustafa al-Kadhimi, after its former prime minister, Adel Abdul Mahdi, resigned under pressure from demonstrations. Prime minister al-Kadhimi has signaled he’ll consult with the protestors and accommodate  their requests, including a vow to release prisoners kidnapped during the uprisings. In the days that followed his appointment, hundreds of Iraqis have begun to gather again in the streets to continue their demands for change.

The protests mark a departure from older generations’ more conservative values and norms: Iraq’s Generation Z has different notions of gender roles, for example. While women have participated in past Iraqi uprisings, their presence in recent demonstrations is even more central and visible. In a society that traditionally discourages men and women from protesting together, Iraqi youth work side by side: the women often march in the lead, the men following behind. It’s an unprecedented cultural shift for the country. 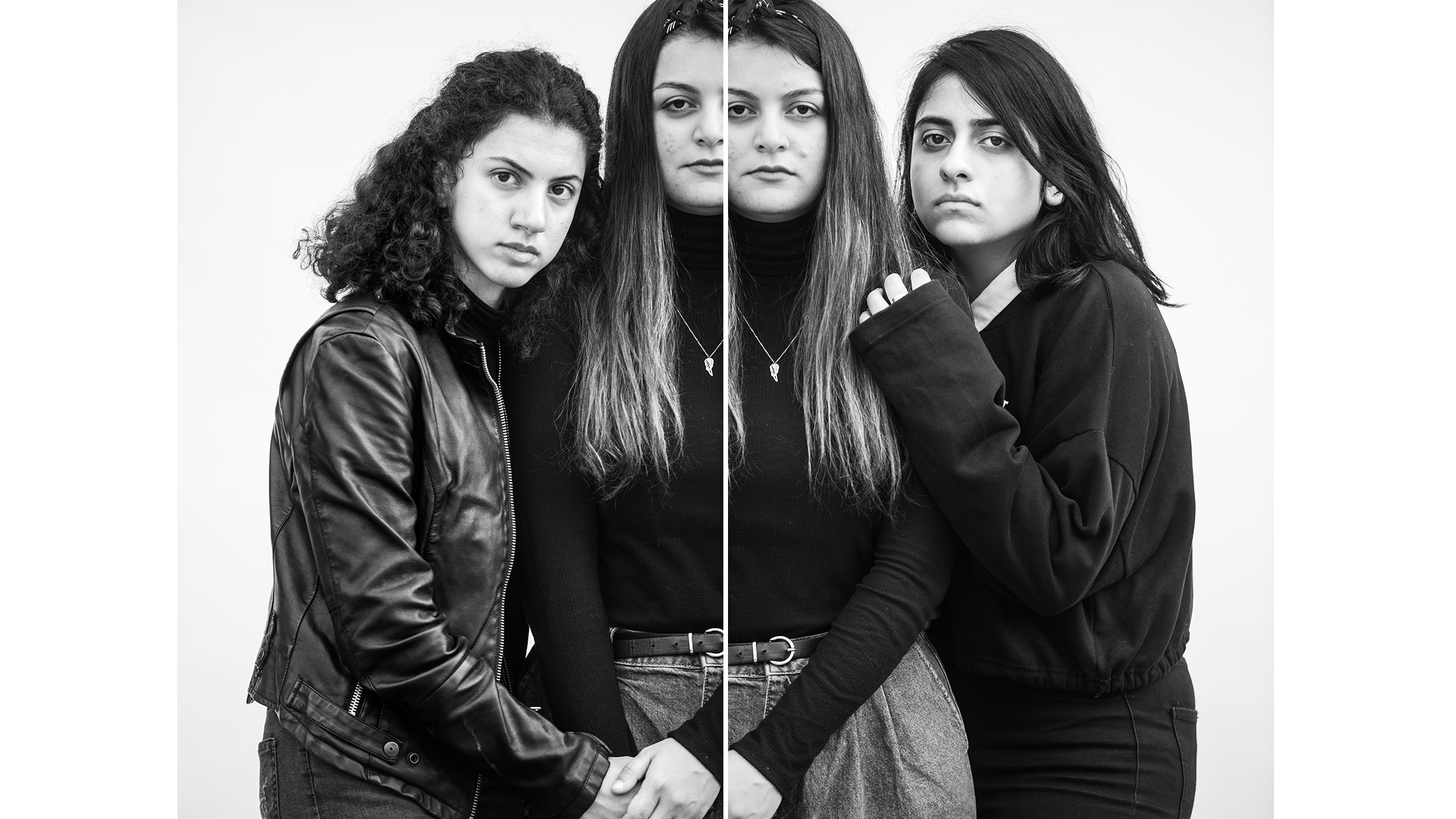 “When you are walking and there are a 100 people who just died, just because they raised their voices and are fighting for their rights to live, you can’t live your life normally after that. And even when we’re here and we’re trying to help and do something, It never feels like enough. Sometimes I think, even if I gave my own soul, it would not be enough. We are trying our best. I’m responsible for [this country] and we need to do something for it.” —Aya Adnan, Tanya Gjassan, Rawan Umar

Like their male counterparts, young Iraqi women are fighting for a better future: better education, more jobs. They also protest for gender-specific causes, such as an end to street and sexual harassment, equal pay, and equal employment opportunities in fields where men typically dominate.

Their roles in the demonstrations are equally varied. Women cleaned the streets and installed electricity in abandoned buildings. They ran volunteer food kitchens to feed the demonstrators. They helped start a newspaper called “Tuktuk,” in honor of Baghdad’s supportive tuktuk drivers, and painted the city’s grey, drab concrete walls with brightly colored murals depicting strong Iraqi women. Young female medical students provided treatment to injured demonstrators. All of this is expected to continue as the demonstrations ramp up under the new prime minister.

I’ve worked as a photojournalist covering conflict in male-dominated societies, such as Iraq and Afghanistan, for more than a decade. Last November, I went to Baghdad to document the protests and quickly noticed a surprising amount of young women in the streets, socializing and protesting alongside men. Each woman had unique characteristics that stood out to me: they were each strikingly beautiful, but most of all, they looked powerful.

To highlight their individuality, I wanted to photograph them in a way that pulled them completely out of their surroundings. I constructed a portrait studio with a stark white backdrop in Tahrir Square, the focal point of the movement, and invited women passing by to have their photograph taken. Some wore headscarves, but most didn’t. Many sported traditional keffiyehs, a checker-patterned scarf symbolizing resistance that’s historically worn by Arab men. They appeared stylish and hip in torn jeans, sneakers, revolution t-shirts, leather jackets, and shades. They posed boldly for the camera, unashamed and unafraid to show their faces to the world.

This collection of photographs depicts the young women on the frontlines of these protests—women who have helped make the recent changes in their country possible. 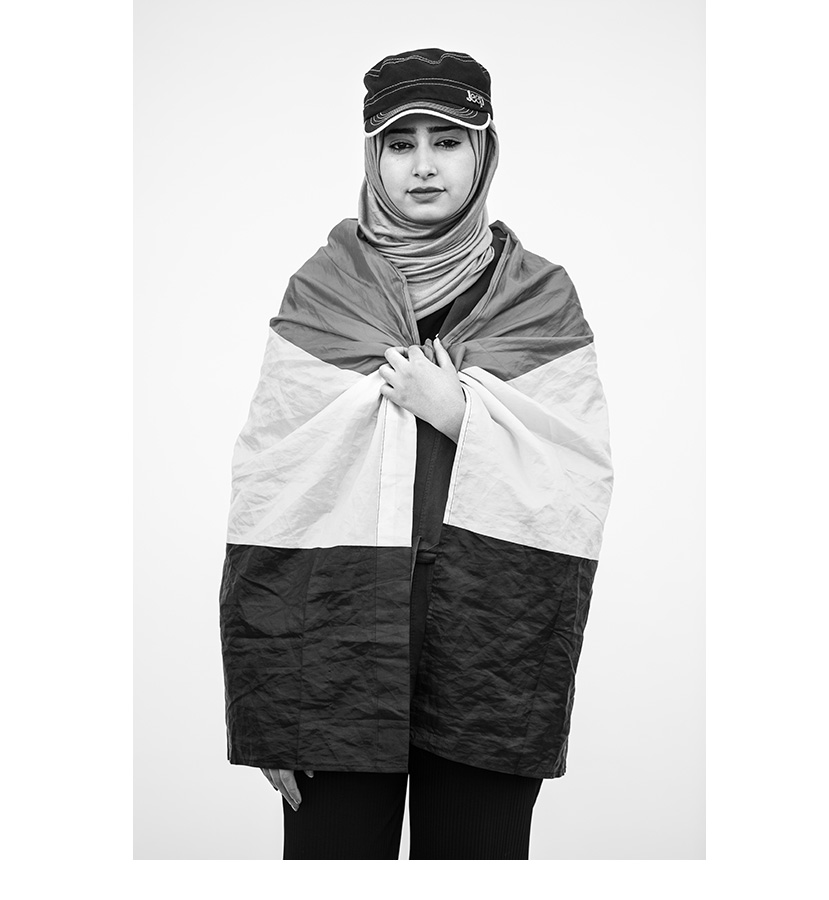 “I came here for my rights; I want a country without [corrupt] political parties. We came here not to destroy but to clean, repair and rebuild.”

“I feel a big responsibility as a doctor, so I had to come here to be close to the people. We are here now if not for our future, for our kids’ future. If not for our kids, then for our grandkids. We want a strong homeland.” 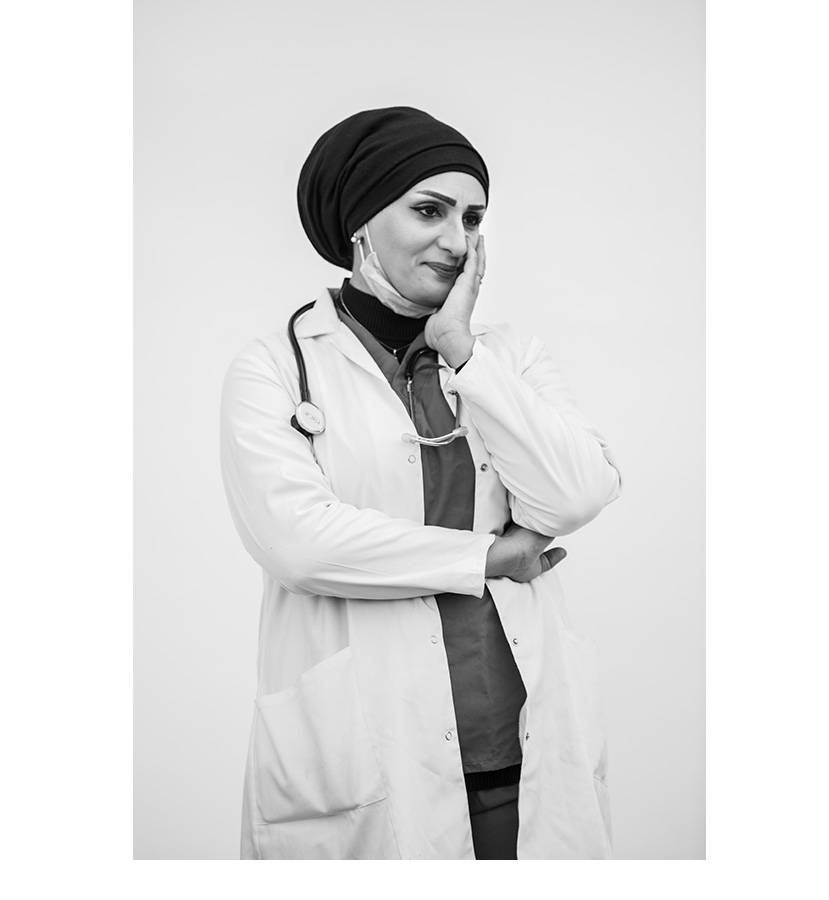 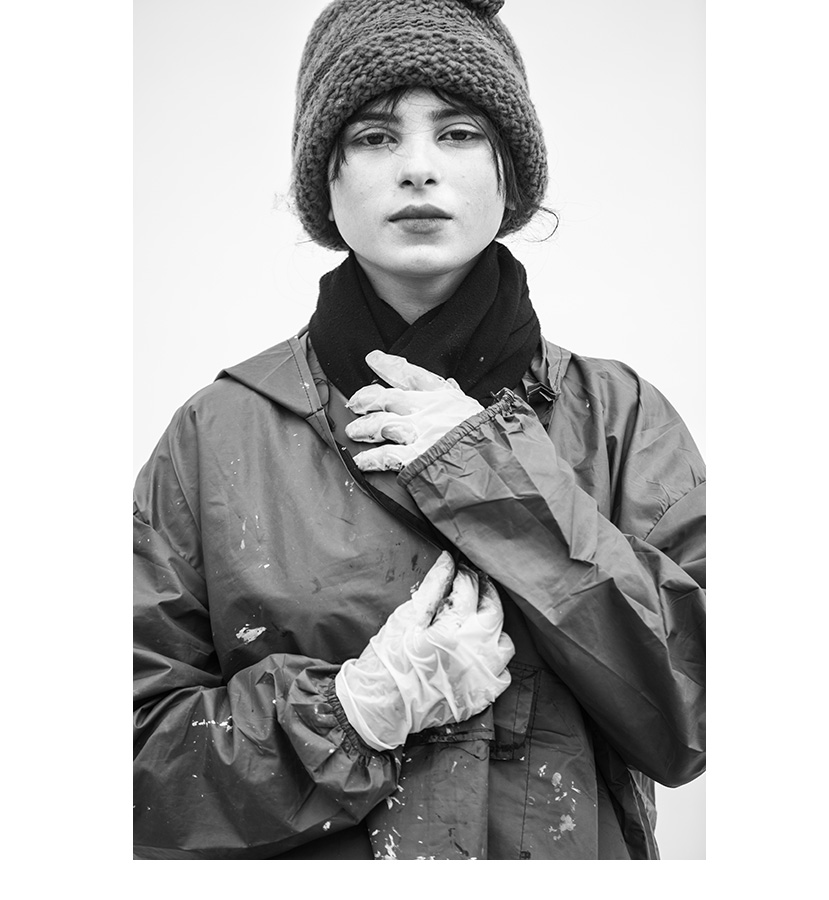 “I paint everything. Some people want to kill me because of my art. I recently went to paint under a bridge, and suddenly, when there were no demonstrators around, they [the Saraya al-Salam militia] came out from tents. They were about to force me to get into the trunk of a car to kidnap me, but as I was about to vanish, an old man interfered and saved me.”

“We came to clean and support the protesters. I cannot go near the frontline where there is violence, so instead, I clean. We clean together like brothers and sister, like we are one hand. Women have been oppressed, but now they are respected; they have a standing in society and they play a very big role in Iraq now.” 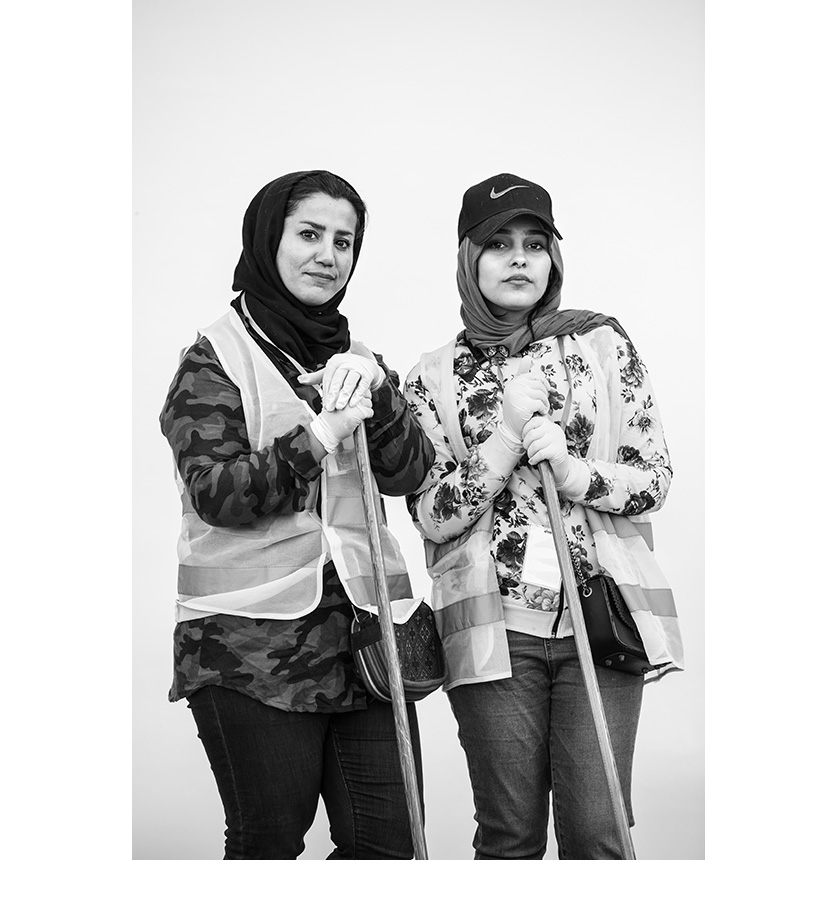 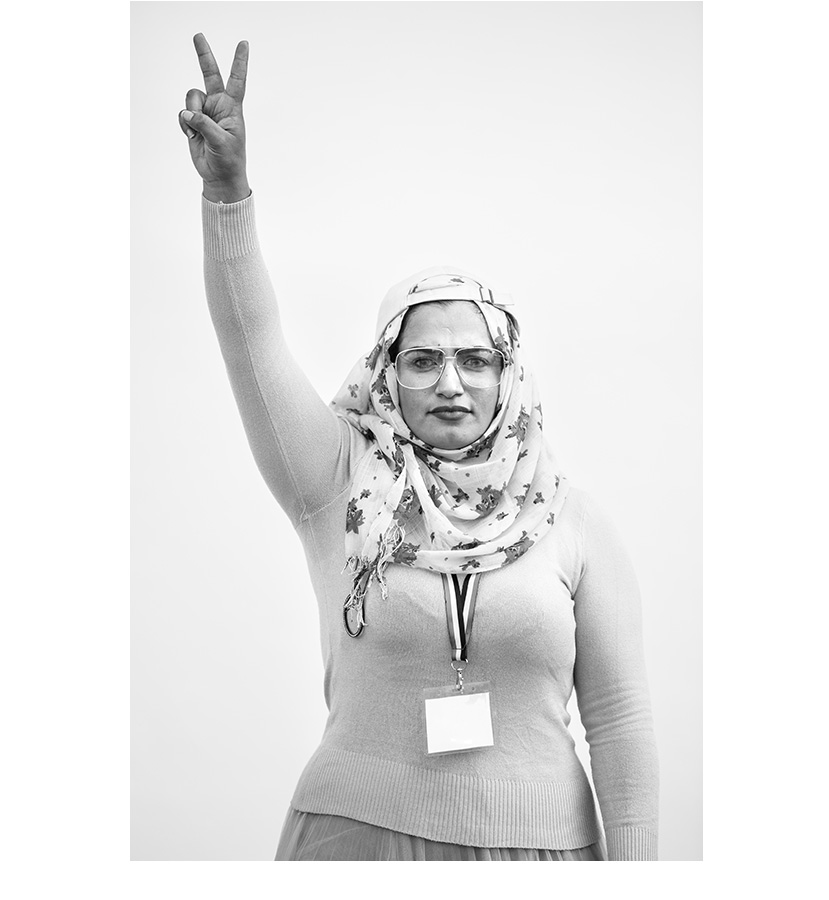 “The situation is chaotic. I hope they meet the protestor’s demands and give people their rights and correct the situation in Iraq… because Iraq is destroyed on all levels. I hope all Iraqi women achieve a high academic position. We hope there is support for women’s rights by UNICEF and the United States because women’s rights are very bad in Iraq.”

“We brought food and lentil soup. We took the food to the tents from the morning to the afternoon. We feel that we belong. There is no fear… we are one hand. I hope that when a woman is at a certain place, she does not feel that she is any different from a man. She needs to be equal with men. Whatever men get, women should get.” 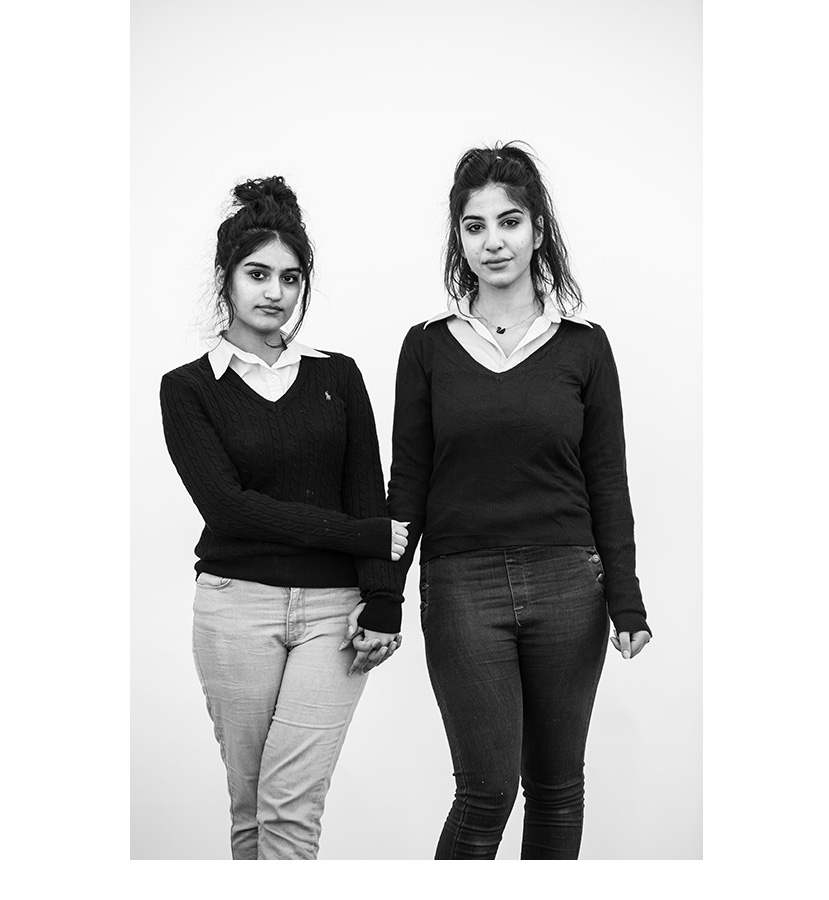 “What I like the most about this demonstration, is the fact that it has united all Iraqis with their diverse sects. All Iraqis became just like one hand. All Iraqis are gathering together despite their differences of geographical backgrounds or skin colors. Everyone here reflects a united Iraq.”

“I came here to help people.” 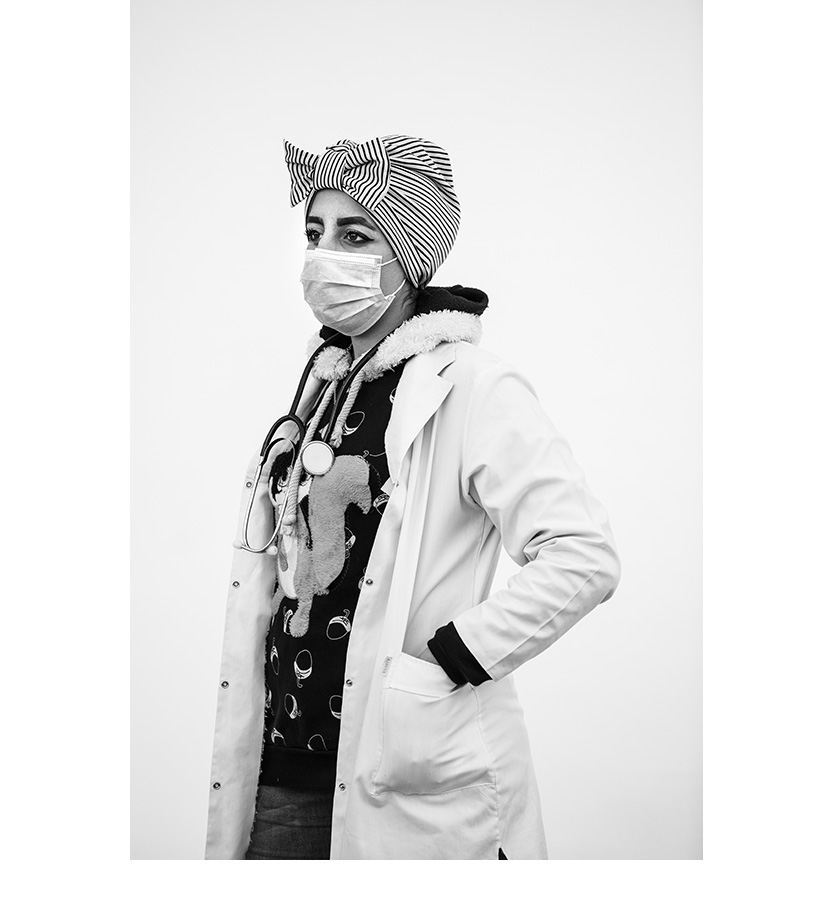 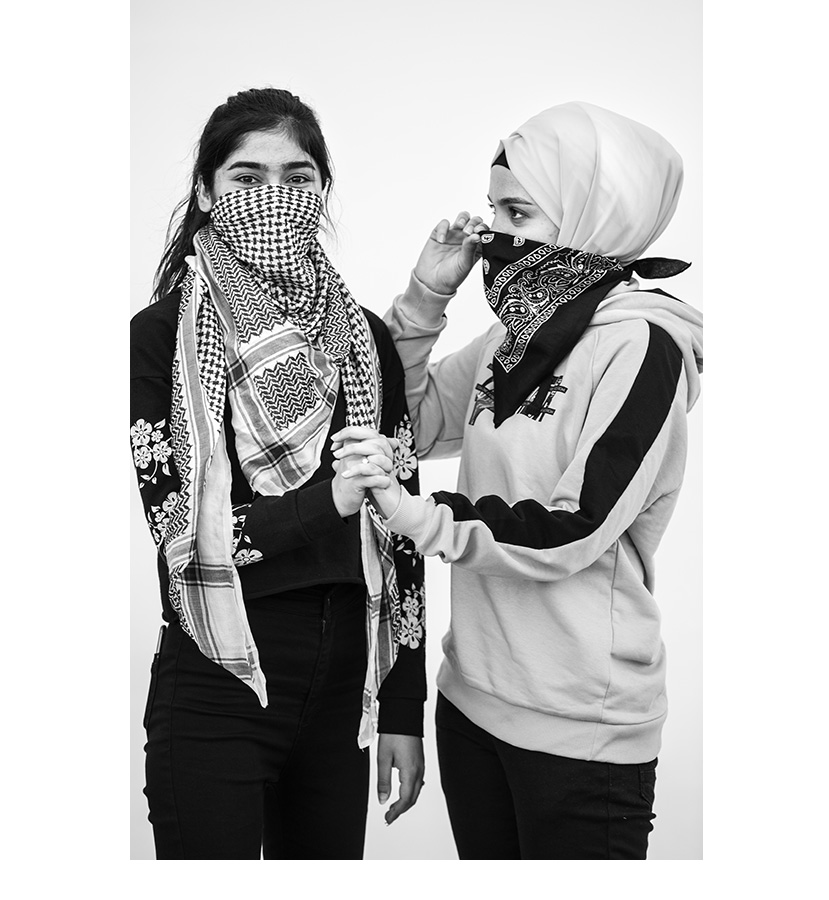