What research tells us about navigating toxic female competitiveness.

It was a Monday night and I found myself, against all rationality, watching The Bachelor. This week’s episode was Season 23’s edition of the “Women Tell All” circus, wherein the producers provoke the most popular contestants into screaming at each other and crying to the cam- era about their broken hearts.

Halfway through the episode, fan favorite Demi Burnett started to yell at her season-long nemesis, Courtney Curtis, about her bad attitude. In response, Curtis pulled a pacifier from her pocket and tried to jam it into Burnett’s mouth. The scene felt mildly unbelievable (who keeps a pacifier in their pocket?), but as with most of The Bachelor’s scripted storylines, it held a glimmer of uncomfortable familiarity.

Competition between women isn’t usually so ridiculous, but it is awfully common. Any woman in the professional world, myself included, has probably at some point felt forced to throw some elbows. And we’ve all been on the receiving end of subtler competitive behavior from female peers, too, like gossip, passive-aggressive comments, or stealing credit for others’ work.

This is not entirely our fault, social scientists say. It’s a deeply rooted human behavior. We all engage in “competitor derogation,” or the act of making someone else look bad to make yourself look better. But men tend to use physical violence, while women are more likely to avoid direct confrontation in favor of passive infighting like gossip or shunning.

“You don’t want to get hurt, because then you can’t take care of your children, so women have to be subtle,” says Joyce Benenson, a psychology professor at Emmanuel College who specializes in human cooperation and competition. As it turns out, jamming a pacifier into someone else’s mouth is the exception for women; veiled aggression is the norm. 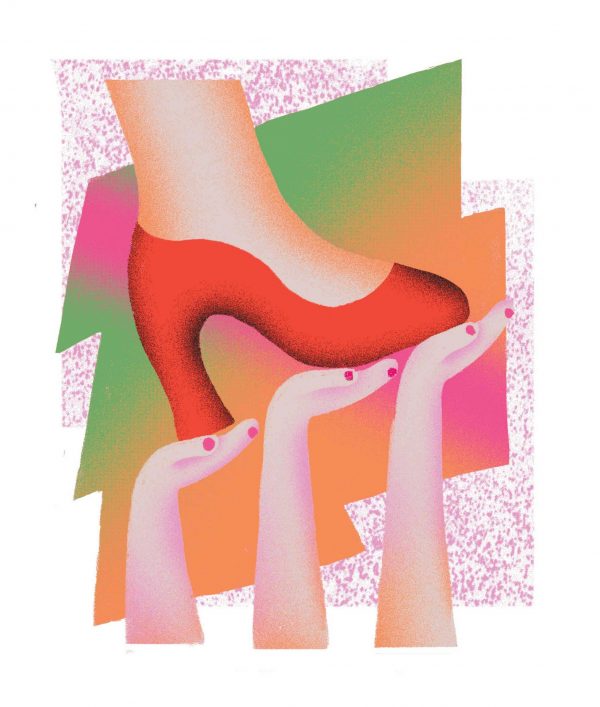 These behaviors go back to our days as apes. A 2001 meta-analysis found that female primates, our long-ago ancestors, typically survived longer and gave birth to stronger offspring if they won more powerful mates. Much later, hunter-gatherers competed with their peers for resources like food and water. As humans began to settle, we built cities, nation-states, and entire civilizations by beating out competitors.

While the neurological elements of competition aren’t well understood, we do know its biochemistry: a hormonal cocktail of testosterone and cortisol, which are associated with aggressiveness and stress. We may not even realize when the system is triggered. In a 2013 study, scientists found that women’s testosterone levels spiked when they smelled the t-shirts of younger, ovulating women, presumably because they were preparing for a fight.

“On an unconscious level, we’re still competing every day to gain access to higher levels of social hierarchy and mates,” says Danielle Wagstaff, a psychology professor at Federation University Australia. “Everything we do is about making ourselves appear better to increase our mate value.”

Wagstaff, who studies mating and dating behaviors, has found that social and tech-based media may make passive competition easier—perhaps too easy. Self-promotion, a classic competitive behavior, is a breeze on large performance platforms like Instagram. Gossip is even more vicious and spreads faster online, too. Under these conditions, it’s hard not to worry that we’ll be forever stuck with The Bachelor–esque brand of infighting.

Rather than competing with other women, we can compete together within the larger system of society to push for necessities

But both Wagstaff and Benenson say our competitive tendencies are more complicated than just “good” and “bad.” Women no longer require mates to achieve success, but competition can still help us advance. Benenson’s research has shown that competitive parents raise more successful children, and women who compete at work enjoy higher positions and larger salaries.

It’s in our interest, though, to curb these ingrained behaviors when they don’t serve us well. Staying in such a high-stress, cortisol-heavy state taxes our bodies, increasing the risk of develop- ing health issues like anxiety, sleep impairment, and heart disease. “We have these behavioral patterns, but we are not beholden to them,” says Wagstaff. “They are just vague patterns that drive how we interact.”

“I think we need to look at using these behavioral patterns for a good cause,” Wagstaff says. Rather than competing with other women, we can compete together within the larger system of society to push for necessities for people of all backgrounds, such as income equality, better parental leave policies, safer work environments, and so much more. After all, women certainly know how to put up a fight.