Why our bodies are built for endurance sports, even as we age.

In the endurance-infused world of ultramarathoning, Pamela Reed is the stuff of legends.

Reed, age 58, estimates that she’s run more than 80 marathons over the course of her 40-year running career, including all the big ones, like London, New York, Chicago, and Boston. Her biggest claim to fame: Her back-to-back wins in the 135-mile (217 km) Badwater Ultramarathon in 2002 and 2003, where she not only set a record on the women’s course, but also beat all of her male competitors across the finish line.

In April, Reed hit the trails again, to com- pete in Zion National Park, Utah’s 100-mile ultramarathon. Reed placed third among the female finishers and crossed the finish line less than 10 minutes after the top male contender. Still, it was a challenging race, even for Reed. Up in the mountains, temperatures plunged below 30 degrees and by 2:30 in the morning, it was dark, and Reed was freezing. Her mood black- ened. All she could think about was getting back to her car and turning on the heat, she explains.

“I faltered on my positivity,” Reed says. “I’ve got to work harder on that next time.”

“Is there something about women that makes them better suited to this kind of distance running than men?” David Letterman asked her in 2003, when Reed appeared on his late night show after winning Badwater outright for the second con- secutive year.

“Maybe because we have more fat on us?” Reed posited. “Or maybe because we’re able to have children, mentally we can go through a lot of pain. There’s definitely pain involved.”

Are women really better suited to distance running, as Letterman suggested? Yes and no, exercise physiologists and running coaches say. Women’s hormones can give them an advantage in endurance running that they don’t have in power-based running competitions, like sprinting.

“Estrogen is a very endurance-friendly hor- mone,” says Jason Karp, an exercise physiologist and co-author of the book Running for Women, who has coached hundreds of runners over the course of his career. “Women are typically better at using fat and conserving their limited store of carbohydrates compared to men.” Exactly why estrogen triggers women’s bodies to rely on fat, however, is a bit of a mystery. 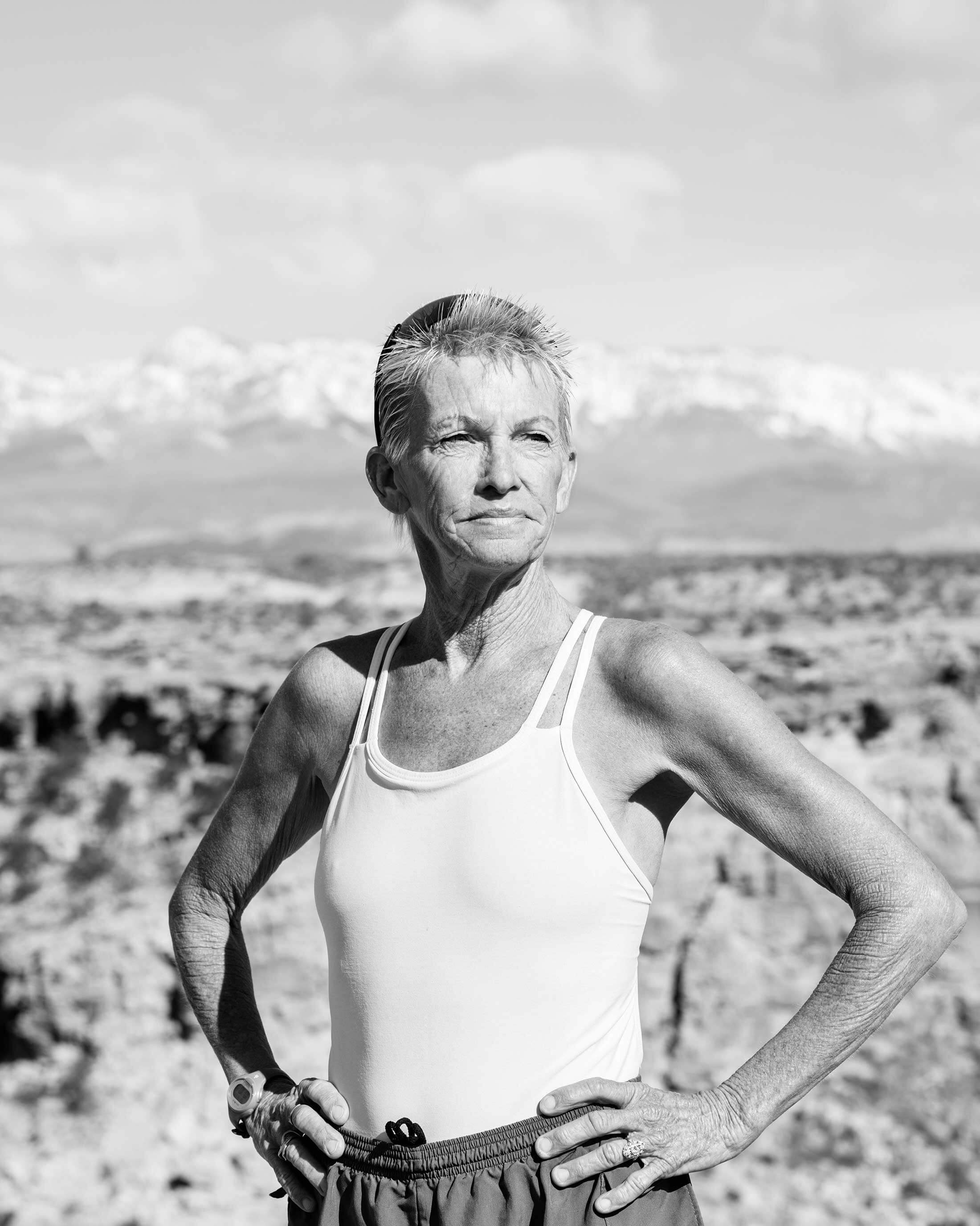 Pamela Reed in Utah the day before Zion National Park’s 100-mile ultramarathon, where she placed third among female finishers in April.

“Between 100 meters and the marathon, there’s about a 10 percent difference between the best men and the best women,” Karp explains. “When you get into ultramarathons, that difference shrinks.” Indeed, in the case of Reed’s first-place overall finishes, that difference disappeared altogether.

AGING OUT OF FIRST PLACE

Regardless of gender, all runners eventually slow down as they age. In part, this has to do with changes in skeletal muscle fibers as humans get older, which can be divided into two types: slow- twitch and fast-twitch.

“Both men and women are born with a certain percentage of slow-twitch and fast-twitch muscle fibers,” Karp says. Slow-twitch muscle fibers, which are also known as Type 1 fibers, are the type you use for everyday activities like standing, walking, and climbing stairs, while fast- twitch, or Type 2 fibers, only get recruited during powerful movements, like heavy strength training or sprinting.

As men and women age, especially once they pass 50, they tend to lose muscle mass as a part of a process called sarcopenia, according to Peter Tiidus, dean of applied health sciences at Brock University in Ontario, Canada. “You tend to preferentially lose more of the so-called fast- twitch muscle fibers than the slow-twitch muscle fibers as you age,” he says.

Unlike muscle atrophy, which occurs when a muscle is immobilized (binding an arm in a cast after an injury, for example), sarcopenia “is essentially selective cell death,” Tiidus says.

ADVENTUROUS RACES AROUND THE WORLD, FOR DISTANCE RUNNERS 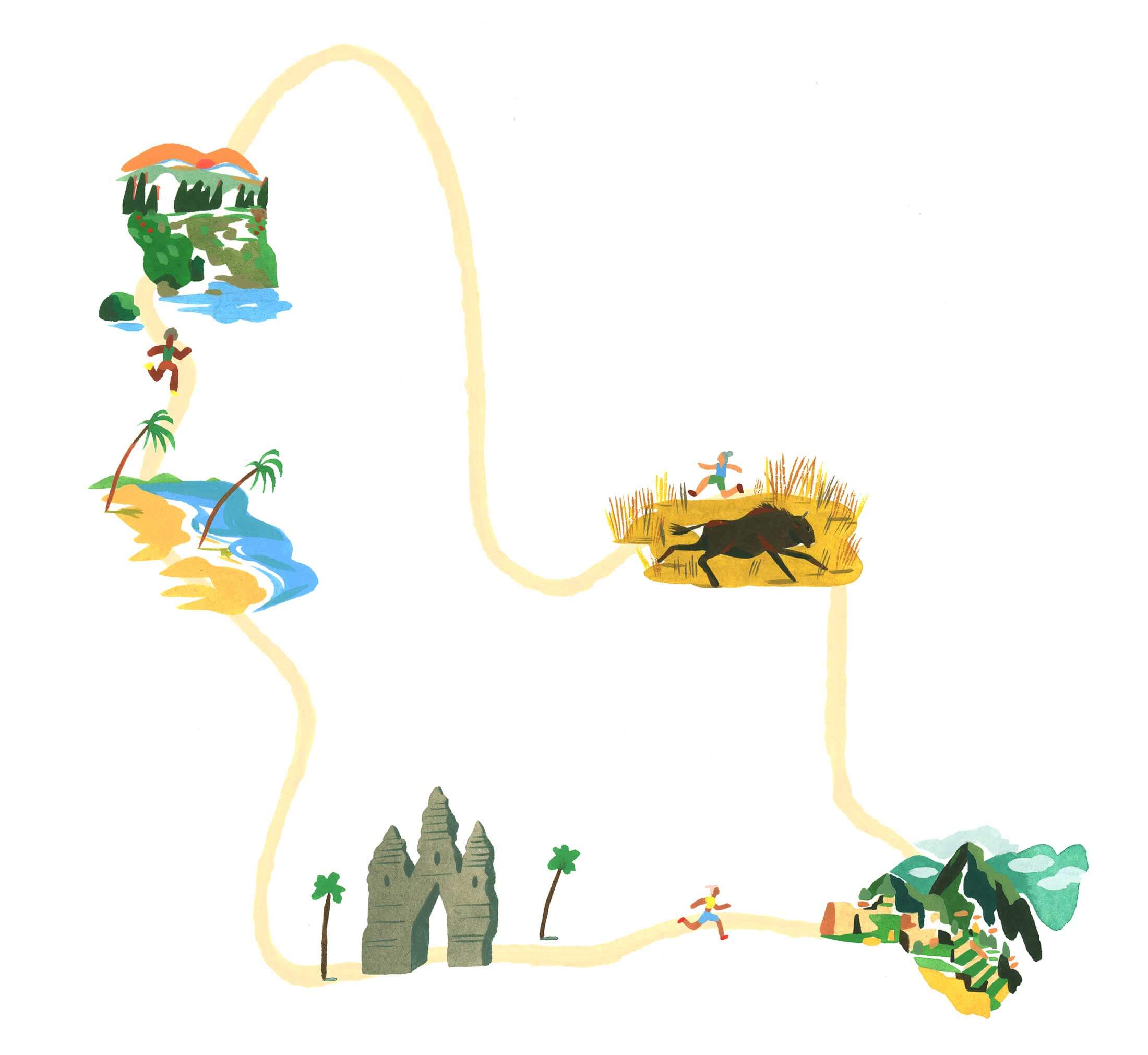 Suzuki Midnight Sun Run
This Iceland-based half-marathon takes place at night during summer solstice, when the sun doesn’t set. Marathoners begin the course in the Laugardalur district of Reykjavík before taking paths through the summer night to the finish. After the race, runners unwind with a midnight swim in the nearby geothermal swimming pool, hot tubs, and steam baths.

Honolulu Marathon
The fourth-largest marathon in the country kicks off at 5 a.m. on the island of Oahu’s Ala Moana Boulevard, which, fittingly, means “path by the ocean” in Hawaiian. Runners will pass unspoiled beaches, parks, and surf spots along the shore, as well as delightful souvenir shops along Waikiki Beach, all the while met by cheers from tourists and sunbathers.

Angkor Wat International Half-Marathon
This half-marathon, which draws thousands of runners each year to compete amidst the grandeur of Cambodia’s famous UNESCO world heritage site, starts and ends at the Angkor Wat temple, with views of Angkor Archeological Park, Preah Prom Rath pagoda, and other ancient temples along the course.

Big Five Marathon
This South Africa–based trail marathon rewards thrill- seeking distance runners with the chance to see African wildlife on foot as they traverse the Entabeni Game Reserve course, all the while keeping an eye out for Africa’s Big Five game animals: elephant, rhinoceros, buffalo, lion, and leopard.

Inca Trail Marathon
Since the Inca Trail is a national park, there’s no “official” Inca Trail Marathon, but for enterprising outdoorswomen, Andes Adventures’ Inca Trail Marathon is the next best thing. Runners follow the trail, complete with high-elevation peaks like Dead Woman’s Pass, to the lost city of Machu Picchu, a UNESCO world heritage site and the most famous Inca ruin on Earth. 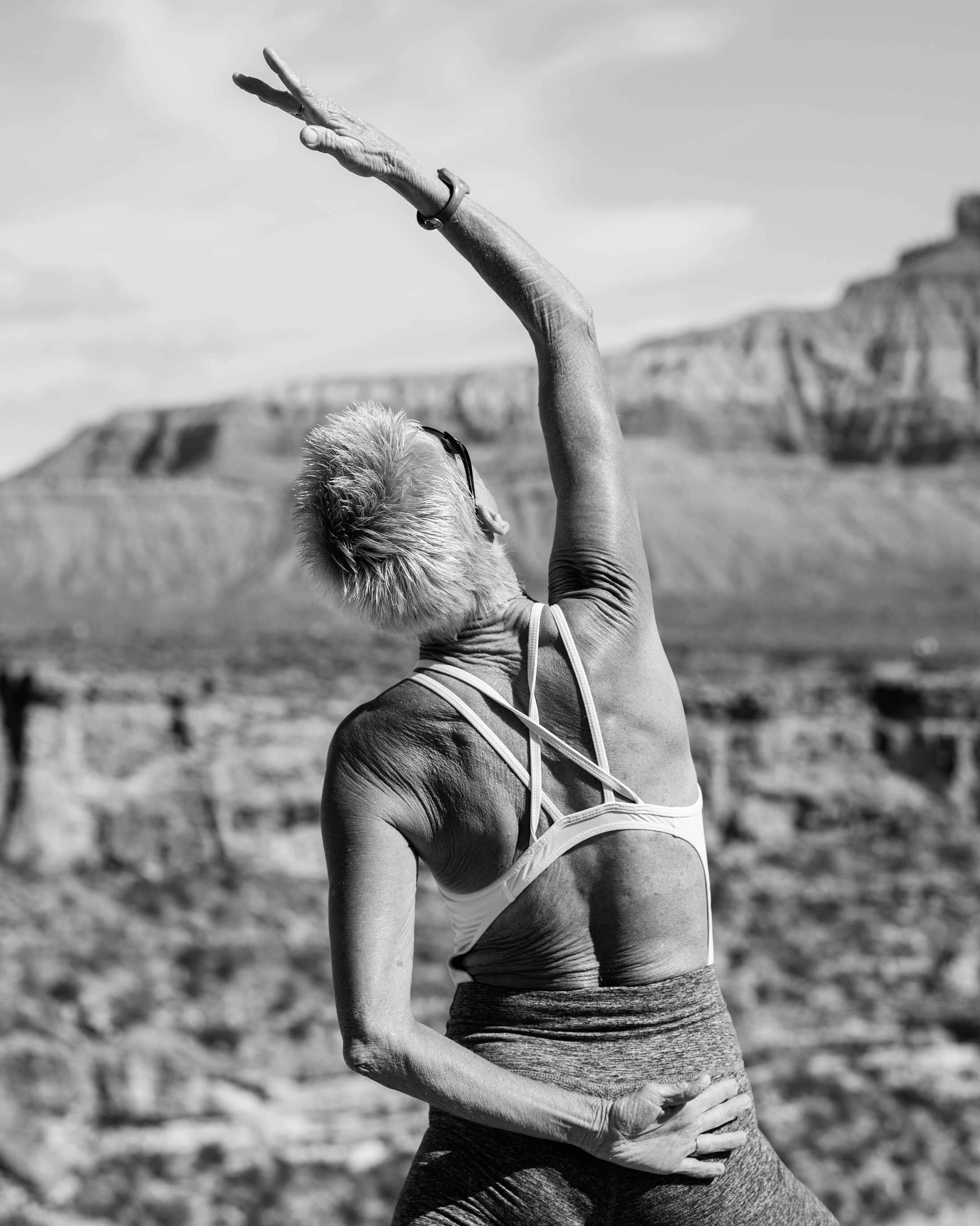 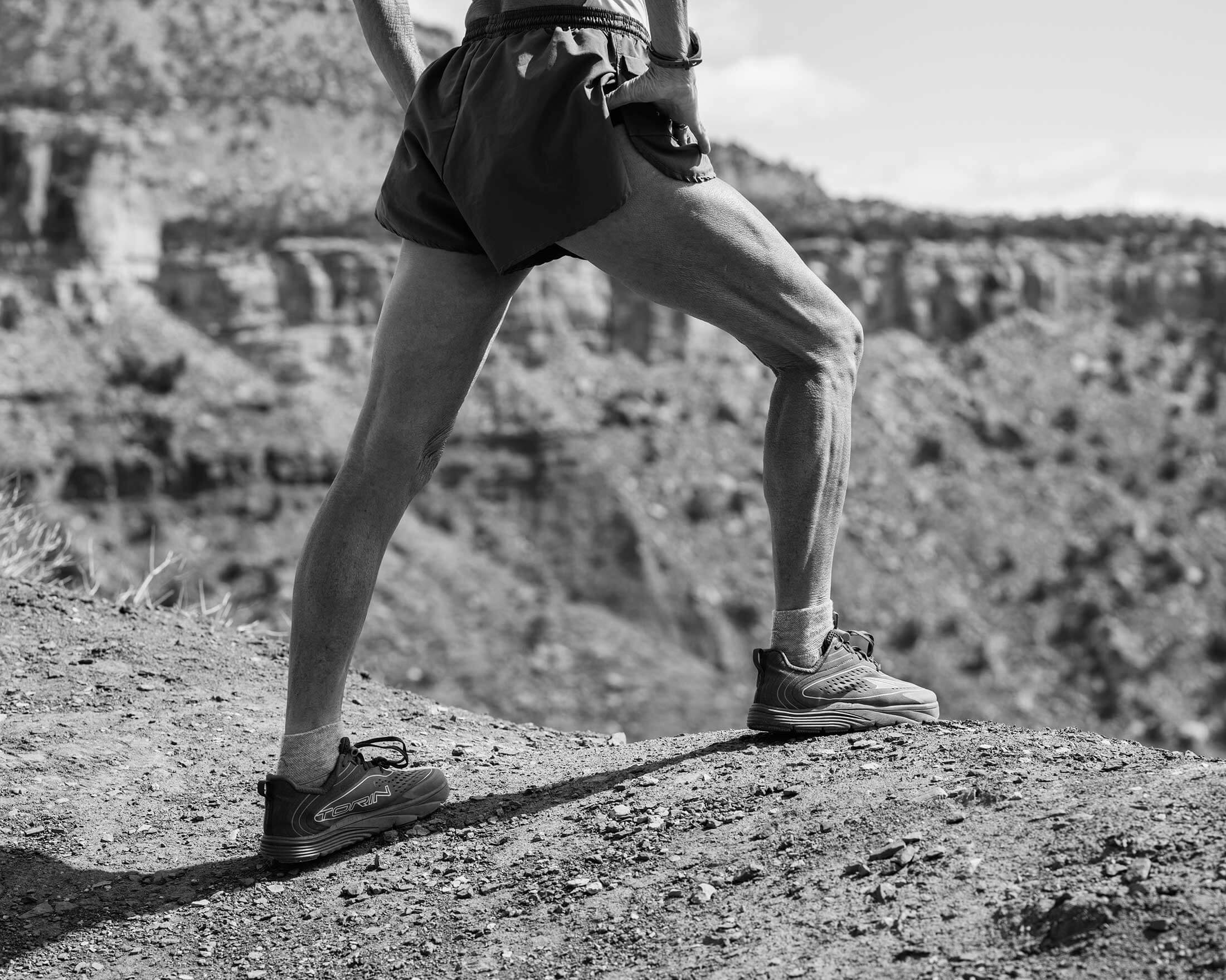 Reed stretches and practices yoga in the desert near Zion National Park the day before the ultramarathon.

USE IT OR LOSE IT

That’s not to say athletes should resign them- selves to slowing down once they hit middle age.

“Strength loss, balance loss, it’s all preventable through training,” says Chris Kolba, a sports medicine physical therapist and strength and conditioning specialist at the Ohio State University’s Wexner Medical Center. “You’re not going to counter aging, but you can significantly change the course of your ability to function, whether that be in life or on the road for running.”

Reed’s diverse workout routine, which mixes strength and endurance training, is a useful blueprint for female distance runners, who are particularly at risk for osteoporosis in the hips, wrists, and shoulders as they age, a condition that can lead to injuries that derail training. 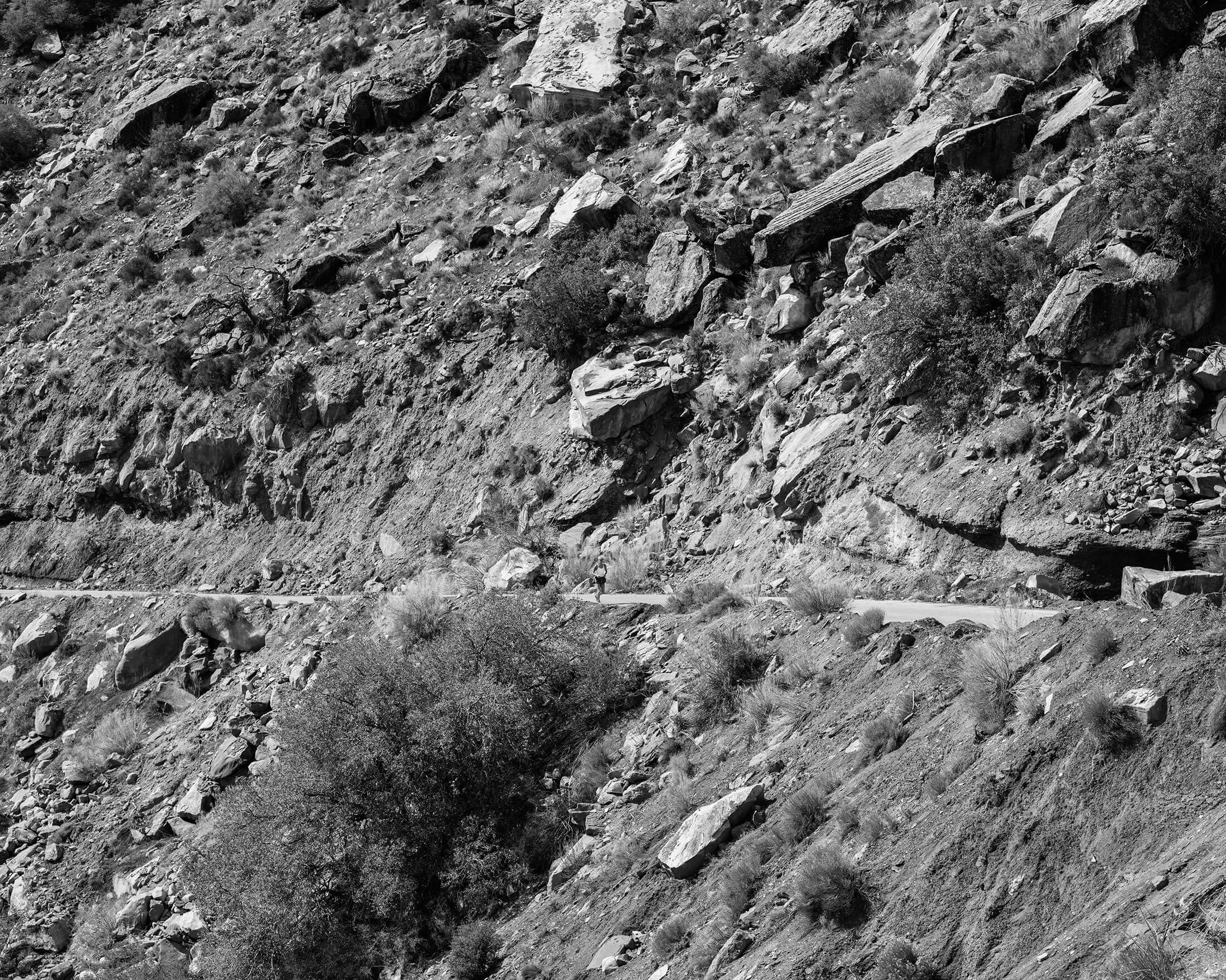 I’m not joking when I say that I hope I drop dead on a trail, or on a road, running.

“Once women go through menopause and don’t have estrogen, their endurance really drops off,” Karp says.

With the right mix of endurance and strength training, women can maintain or even improve their distance performance as they age, up to a point. As the fast-twitch muscle fibers die off, the slow-twitch muscles become more dominant.

For Reed, that peak came even later in life. “My best best running was from 40 to 42,” she says. “That’s when I broke three hours in a marathon and won overall.”

As long as older women are continuing to strength train with weight-bearing exercises, which can improve bone density and ward off potential stress fractures, Karp says distance running should be considered a lifelong sport for women. It’s a philosophy Reed wholeheartedly subscribes to.