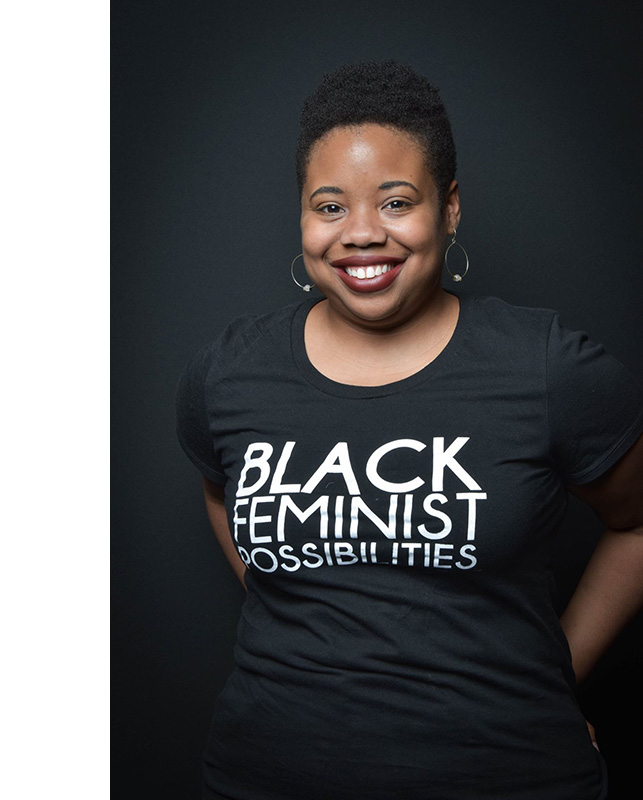 Trix files: ‘All Of These Systems Are Working Together’

The co-founder of Black Lives Matter Memphis discusses the erasure of Black female leadership, the adultification of Black girls, and what’s standing in the way of reproductive justice for Black moms.

She and a handful of other activists started organizing, and today, their movement faces a renewed sense of solidarity and strength. With protests continuing to sweep the nation, Trix spoke to Perry about the unique challenges facing Black women and girls, and what the wider women’s movement can learn from the fight for racial justice.

More than two weeks have passed since George Floyd’s death was captured on video, and almost two weeks since protests began in Minneapolis and spread across the United States. It’s been an emotional time: at times horrifying, at times extremely inspiring. How have the last couple of weeks been for you personally?

I think there are a variety of emotions that come up. Some anger, some related to hope, and how our movement can be made stronger by this moment as we move into the future. I also feel frustration. I’m thinking about all the years of systemic racism, generations and generations. But also thinking about how so many movements have come together at this time.

There has certainly been an unprecedented amount of support for Black Lives Matter from people who were previously not involved. How did you personally become involved in the BLM movement?

I started the official Black Lives Matter Memphis Chapter in 2015. It was soon after the news came out that Darren Wilson, the white police officer who shot 18-year-old Michael Brown, would not face criminal charges. Then, in the summer of 2015, here in Memphis, Darrius Stewart was killed—a young Black man who was running away from a police officer. There was a lot of organized action around both. Those killings made me think, “We need BLM chapter here—it’s a majority Black city.” So I started organizing with about 10 other activists to create this chapter. In the past I had seen Black leadership being devalued, especially Black women’s leadership. So I really felt it was important to have a chapter that really centered the leadership of Black, gender-oppressed people and Black queer folk, to think about the issues.

What kinds of immediate actions did you take?

In the beginning, our chapter specifically decided on two campaigns to focus on. One is transformative justice for schools in Memphis’s own district, Shelby County. (Transformative justice is an ideology and political framework that seeks to respond to violence without “creating violence” or alienating the accused with punitive measures such as the commonly used tactics of suspension, expulsion, policing, or incarceration). The other campaign is to end money bail and pretrial detention (which results in many Black people being held in jail without being charged, simply because they don’t have the resources to pay for bail). As part of that second campaign, every year since 2017, our chapter has been participating in the Black Mama’s Bailout.

There is research that talks about the adultification of Black girls. That Black girls are seen as older than they are. And they’re held to these unfair racist and sexist standards. They don’t get to be Black girls.

Your work touches on the intersection of incarceration, bail, and reproductive freedom.

Tennessee had a “Fetal Assault” law that was in effect from 2014 to 2016, which criminalized women who gave birth to babies born with neonatal abstinence syndrome, a condition that affects babies whose mothers used drugs while pregnant. They ended up in jail instead of getting the help they needed. I’ve seen women who we bailed out so that they could go and give their baby some milk. Those are things that affect women differently than men.

I find it really inspiring how many BLM chapters are founded by women, and the fact that the global #BlackLivesMatter global network, which was founded in 2013, was co-founded by three women. Is there a specific facet of the movement that focuses on women’s issues?

We’re thinking more about campaigns that can focus on Black girls. I did research for my master’s program on how Black girls are impacted by punitive disciplinary policies in schools. I’ve read research where Black girls talk about how they’re told they have too much attitude. These things make Black girls feel like they can’t be themselves. And because that’s how school teachers and administrators “read” those girls, that leads to them getting suspended.

How does that phenomenon play out in the school system?

Black girls’ suspension and expulsion is way higher than it is for white girls. There is research out there that talks about the adultification of Black girls. That Black girls are seen as older than they are. And they’re held to these unfair racist and sexist standards. They don’t get to be Black girls. I’m thinking, as an example of punitive discipline like I’m talking about, about the school resource officer in South Carolina who just like, pulled, pulled a Black girl out of her desk. So that prejudice against Black girls is institutionalized and systemic. Again, all of these different systems are working together, driven by white supremacy, that’s leading to all of these things happening to them in school.

Yes, I’ve read some of those reports about Black girls being punished more severely than white girls for the same behavior. What other struggles are specific to Black women and girls?

One thing I want to highlight is the erasure of Black women’s leadership. It’s happened in so many ways. There are so many cases where Black women are the ones who created or developed something, but they don’t get the credit. I’m thinking, for instance, about different times when that’s happened in Memphis. Shelby County Commissioner Tami Sawyer, for example, and her work fighting to get confederate statues in Memphis removed. I read some articles about the statues’ removal that didn’t even name her.

You’re also an advocate for reform in the reproductive health space.

I’m thinking about Black maternal mortality, which is way higher than maternal mortality for white women. A few Black women have told me that they’re so afraid to have children because, they’re like, “I don’t even know if I’ll survive this.” I also know women who have given birth and were very traumatized by their birth experience because they were just not heard by their doctor. That’s why I support people like doulas, especially for Black women. Just the simple fact of that person being in the room can change the outcome for the better.

I’ve seen the studies showing that Black women and Native American and Native Alaskan women are about three times more likely to die from pregnancy-related causes than white women.

Yes, and I’m also thinking about this town in Alabama where Black women are dying of cervical cancer which is a highly preventable cancer. And the reason? Access to healthcare. So I would say, just being Black women in this country, and globally, too, all of the oppressions come together and intersect and exacerbate the experiences that we face on a daily basis.

When we’re talking about cases of violence against Black women, do you feel they’re treated with equal attention in the media?

Well, first, Black trans women do not receive the same level of attention and outrage. And that is simple transphobia. I also think about the first #SayHerName campaign in 2015. I still have the fliers for that. We wanted to do some kind of action around Black women who were killed by the police. I feel the media is not giving enough coverage to that and to all the Black people who are being killed by police, including Black women. You know, through that #SayHerName action back in 2015, there were so many Black women whose names I hadn’t even heard of who were killed by the police.

On that note, what do you think the women’s movement can learn from Black Lives Matter?

The women’s movement needs to see issues as interconnected. I go back to a work that I think of very often, called the Combahee River Collective, written by a group of Black feminists who met together in the mid 1970s. Those feminists talked about shortcomings of the larger women’s feminist movement. How, at that time, they didn’t pay attention to all the intersections of oppression. That’s what BLM points out. We’re saying all these things are interconnected. We’re trying to dismantle racism. We’re trying to dismantle capitalism. We’re trying to dismantle all these things which have always devalued Black people. I think the feminst movement is still kind of saying, “Oh, we just want, you know, more women to be CEOs.” And it’s not challenging the system. Not fully challenging the system that set up oppression and hierarchy to begin with.

What do you want people to understand you’re fighting for?

You’ve spoken at length about dismantling systems like racism, capitalism, and many more. What does the world look like without those systems?

That’s a really good question because it’s not just about what we’re trying to get rid of or dismantle. It is very much about what we’re trying to build, right? What do healthy and vibrant communities look like? For me, it’s very much about people having their needs met. It looks like people having like access to housing and clean water, access to healthcare without judgment, without fear or discrimination. People having self determination. And there’s an environmental piece, too—not treating the environment like the corporations have been doing. There’s this symbiotic relationship with the environment and with people and other living beings as well. All of this that I’m thinking about is rooted in community, to see interconnectedness of all of us. To see that we need each other.

Do you think these last couple of weeks have brought us closer to that?

Absolutely. I definitely think that with uprisings and pushing back on the status quo, pushing back on the system, it is leading us to a better world. A world where state-sanctioned violence isn’t the norm anymore. It’s getting us closer and it’s pushing us to really be imaginative, to really think about these different ways that we can be in relationship with each other and in community.