The Art of War

As news of Syria’s devastating civil war rocks the world, two sisters use storytelling to evoke a deeply personal portrait of their country’s heartbreak and hope. 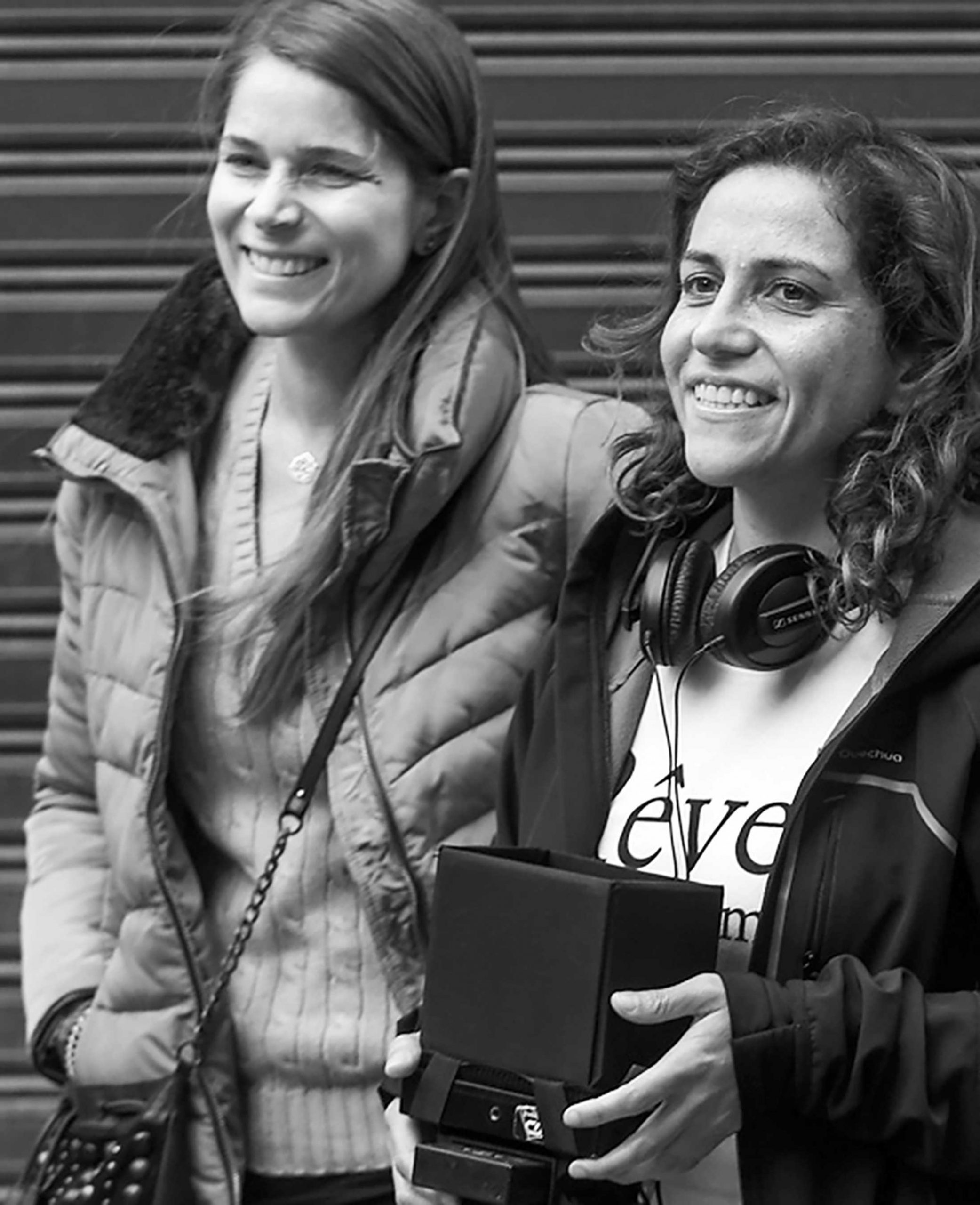 In Soudade Kaadan’s short fiction film, Aziza, a Syrian couple exiled in Beirut find solace in their own imagination. When their car stalls in the middle of a busy street, the protagonist urges his wife to visualize an alternative scenario: of being back in a Syria where checkpoints have been discarded and people’s windows reopened.

In Beirut, they drive on, away from the reality of their country still caught in a devastating civil war that has left more than half a million people dead or missing. With her country falling apart, Soudade’s films focus on those putting back together the pieces of their lives.

Aziza picked up the Grand Jury Prize for short films at the 2019 Sundance Film Festival, while Soudade’s first feature film, The Day I Lost My Shadow, won the Lion of the Future award for best debut film at the 2018 Venice Film Festival. Written during the first year of the Syrian uprising, The Day I Lost My Shadow follows the story of a mother and son who are separated when supplies run short.

Stories like Soudade’s seldom surface from the avalanche of news stories that track the political development of the Syrian crisis, rather than focusing on the individuals themselves. But she and her sister, children’s book writer and illustrator Nadine Kaadan, strive to unearth them.

Nadine’s most recent picture book, Tomorrow, about a Syrian boy struggling to make sense of his country’s conflict, was released in English translation last year and was recently nominated for two awards. She’s currently in the process of illustrating a nonfiction children’s book that tells the story of a Syrian refugee who travels to Belgium and struggles to bring his dog along.

Seven years ago, Nadine moved to London and Soudade to Beirut, though their parents chose to stay behind. They recently spoke with —Trix to reflect on the impact of their work, what drives their creative process, and how they’re using art to make sense of the events shattering their country.

How did the events unfolding in Syria begin to seep into your work?

Nadine: I didn’t know what I was feeling at the time, I just needed to express myself. I needed to understand what I was feeling through the images I was creating. The war in Syria is so painful and complex that it’s going to take us another generation before we can look back and try to make sense of what is happening.

Soudade: I wrote The Day I Lost My Shadow in 2011, at the beginning of peaceful protests in Syria. It was traumatic seeing the country suddenly sink into violence, seeing the city being bombed and my friends disappearing. What I was feeling and living through at the time was the inspiration for the film. But now that I’m in Lebanon, I face different circumstances, including the prejudices that Syrians here experience. This difficulty of being in exile inspired my next film, Aziza.

Nadine: Giving readings of Tomorrow to children refugees has been eye-opening. The readings encouraged them to open up and tell their own stories, which has helped me understand what they’re going through a bit more. One thing that surprised me is that a lot of non-Syrian adults come to my readings without their children. They tell me they want to hear stories about Syria that go beyond the news.

Soudade: My stories have generated heated debate in some countries because they reflect my personal point of view of the war, which has divided the country. But mostly they’ve been well received, especially in Europe, Palestine, and the rest of the Arab region. I found the warmest reception from audiences in countries that have experienced conflict, like Palestine, India, Jordan, and Lebanon. I didn’t need to explain my films to them, as trauma is the same worldwide.

What made you choose your forms of storytelling?

Nadine: I’ve always loved painting and drawing, ever since I was a child. I created my first magazine when I was 10 years old. I knew this was what I wanted to do. But it happened with a lot of support from my family. My mum used to buy me very sophisticated paint and watercolor supplies. After illustrating for five or six years, I felt it was time to start telling my own stories.

When you leave, you feel the need to recreate the country you left behind. 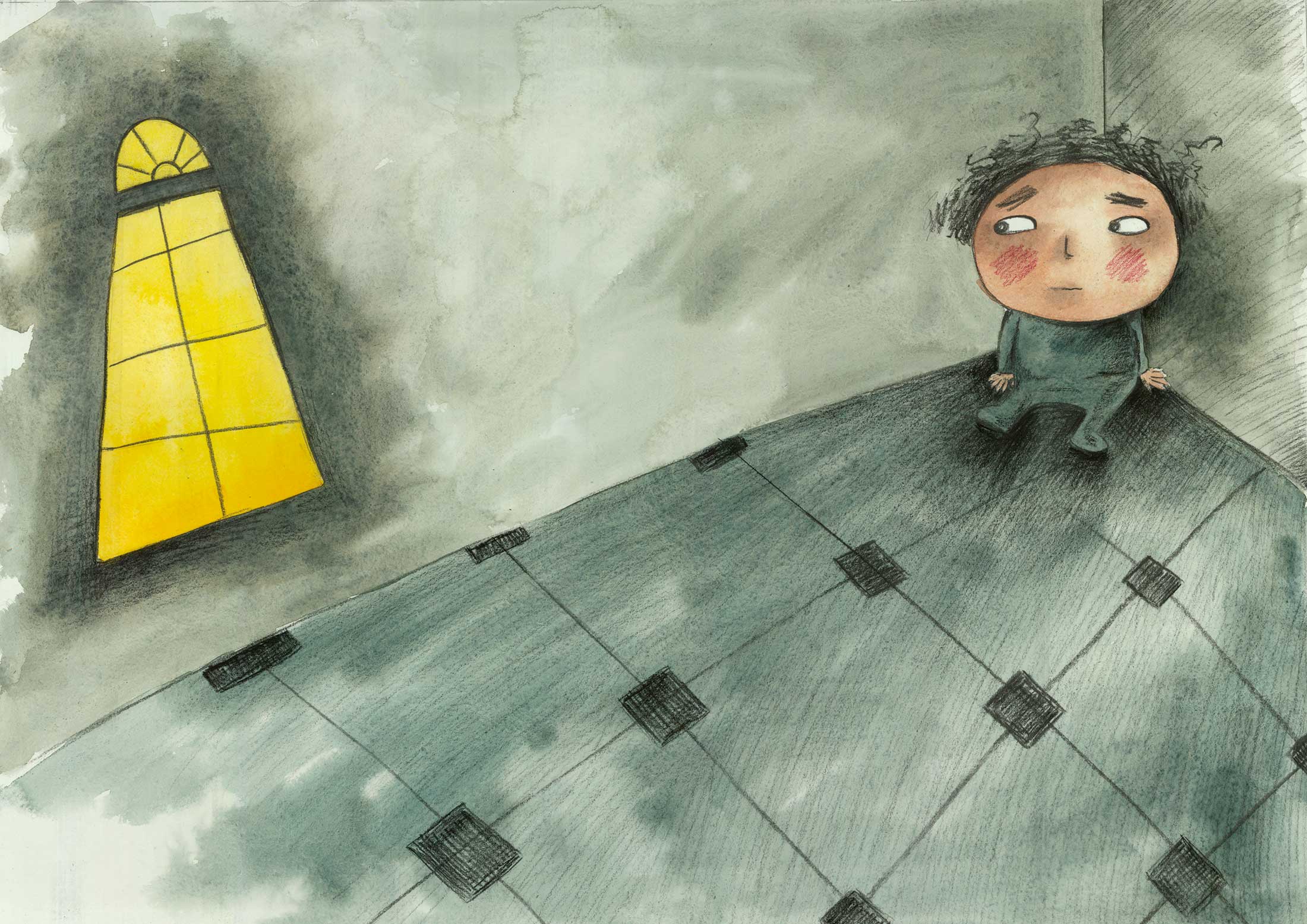 From Tomorrow, Nadine’s most recent picture book about a Syrian boy struggling to make sense of his country’s conflict.

Soudade: Film wasn’t an obvious choice. In Syria, there’s no cinema school, and we only had two functioning movie theaters where I grew up. I was awarded a scholarship to pursue a master’s degree in theater in Beirut. I did well, but I wasn’t happy. So I thought, why not try filmmaking? I asked if I could swap my scholar- ship. On the first day, as soon as I stood behind the camera, I knew that this was what I wanted to do for the rest of my life.

Have you two ever collaborated?

Nadine: We are part of each other’s work, regardless of any official titles or positions. She helps me write my stories and I go to her film sets. She’s my creative partner in crime!

Soudade: The creative conversation between us is nonstop. We worked on my first documentary film, Damascus Roof and Tales of Paradise, together, which aired on the Al Jazeera documentary channel and screened in Damascus in 2011. Nadine drew the animations for it.

How has the war changed you as an artist?

Nadine: The shock of what was happening in Syria was first reflected in my illustrations. Suddenly my work was becoming darker and edgier. I couldn’t illustrate the beautiful pink and dreamy images I was creating before. Then I felt the need to tell a story about what was going on around me, and that’s how Tomorrow came about.

Soudade: As a Syrian, not only do I feel like I lost a home, I also feel like I lost my shooting locations, the city I loved, the place where I know where to shoot and where the best place to put the camera is. When you leave, you feel the need to recreate the country you left behind in every shooting location. Every time I go out to film, I look for Syria, but it’s not there. That makes my heart ache.